1861 Wyld Map of the United States during the Civil War 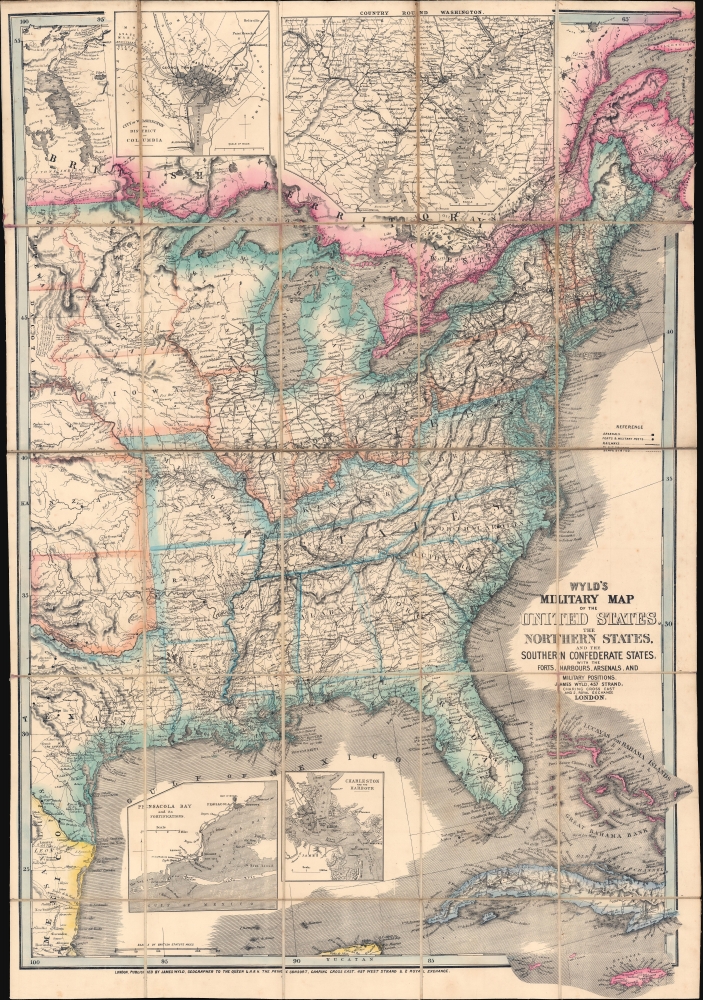 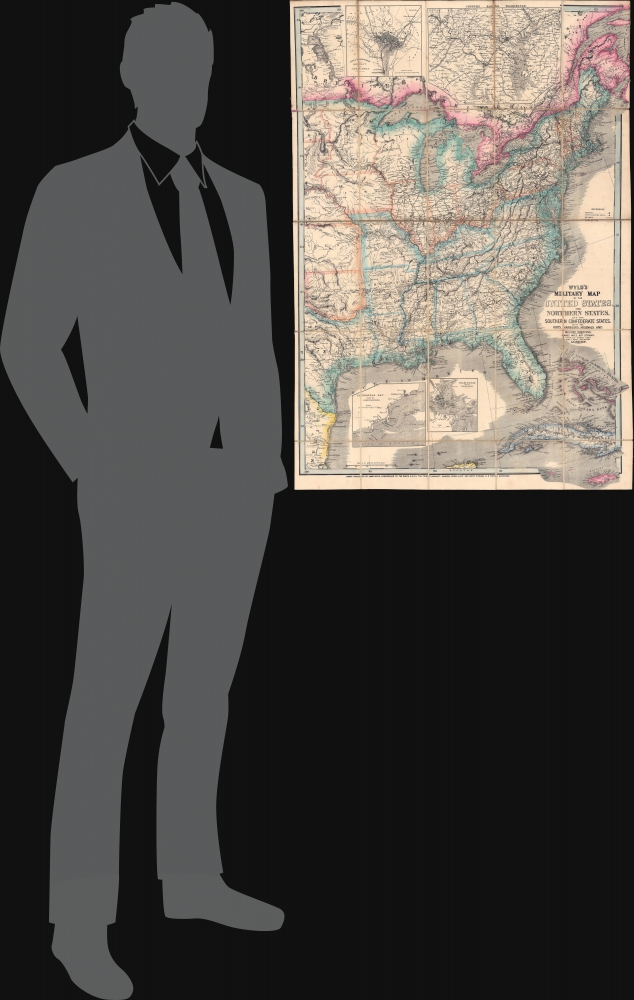 1861 Wyld Map of the United States during the Civil War

A rare James Wyld map of the United States issued in 1861, during the Secession Crises that preceded the outbreak of the American Civil War (April 1861 - 1865). Wyld was particularly masterful at capturing political events throughout the world as they happened and leveraging his impressive publishing operation to quickly produce and distribute pertinent maps to the invested public. In this case, the map distinguishes between the 'Northern States' (orange border) and the 'Southern Confederate States' (blue border). Wyld here erroneously conflates slaveholding states with Confederate secessionist states - in particular, Missouri, Kentucky, Delaware, and Maryland, which allowed slavery but remained loyal to the Union. Arsenals, forts, and military posts are highlighted and keyed, underscoring that 'war' was very much in the air. The map is also noteworthy for recognizing the apocryphal territory of 'Chippewa', roughly corresponding to modern-day North Dakota.

This map was published in early 1861, just prior to the outbreak of the American Civil War, but after the majority of southern states had issued articles of secession, forming the Confederate States of America. Leading up to the 1860 Presidential Election, there had long been tension between the northern and southern states over the issue of slavery. Southern states, with a powerful slavery-based plantation culture, relied on slavery as the basis of their economic and social system. Northern states, most of which were industrialized, had long since abolished slavery, and most considered the practice abhorrent. Abraham Lincoln (1809 - 1865), although not strictly an abolitionist, was morally opposed to slavery and spoke openly against it on the campaign trail. His election in November 1860 lead to the December secession of South Carolina - the most vocal 'states-rights' pro-slavery state. The 'cotton states' of Mississippi, Florida, Alabama, Georgia, Louisiana, and Texas followed suit, seceding in January and February 1861, forming the Confederate States of America on February 4, 1861. When Wyld issued this map, Arkansas, Tennessee, North Carolina, and Virginia had yet to secede.

British Interest in the Secession

The rise of the Confederacy and the impending American Civil War was a matter of the greatest interest in England. On one hand, most British citizens deplored the practice of slavery, which had been abolished in the British Empire since 1833. On the other hand, the large and influential British textile industry relied heavily on cotton imports from the southern states and there was legitimate concern that failure to recognize the Confederate secession would disrupt supply lines and lead to economic instability. They were right and the subsequent Lancashire Cotton Famine (1861 - 1865) corresponded exactly with the Civil War. (Within a year Lancashire mill workers went from being the most prosperous in Britain to the most impoverished.) This map would have been of the utmost interest to parties on both sides of the debate. Ultimately, although a near thing, the British Parliament never recognized the Confederacy.

Class Distinctions in Britain and Support for the Confederacy

The more conservative - and Conservative - members of British society, drawn mostly from the aristocracy and the upper reaches of the middle classes, tended to be supporters of the Confederacy in the American conflict and scornful of the possibilities of liberalism or democracy at home. Many of the spokespeople for this group accepted and publicized the Southern apology for slavery as the basis of a properly hierarchical society. Those in the middle—Liberals whose spokespeople often were dissenting ministers or members of the growing professional groups—tended to support the Union, but held and displayed a variety of views on race, slavery, and democracy. Working-class spokespeople tended to abhor slavery as another system of human exploitation, and they for the most part stood firm to these beliefs even during the Cotton Famine and other war-related economic dislocations. Less certain was the loyalty of workers (as opposed to their spokespeople) to the antislavery cause.

This is one of the few maps that illustrate the 'Chippewa', an apocryphal state or territory roughly corresponding to modern-day North Dakota and eastern Montana. The idea for the state emerged in March 1861, following the statehood of Minnesota and the creation of Dakota Territory. Proponents argued that Dakota was too large and should be divided into smaller territories. They claimed that, although somewhat barren, 'Chippewa' would benefit from tourism when the Northern Pacific Railroad was built. Due to the Civil War and other factors, this did not happen until 1883. We are aware of only two maps that illustrate the territory of Chippewa, both by Wyld, both dated 1861.

Wyld was particularly masterful at capturing political events throughout the world as they happened and leveraging his impressive publishing operation to quickly produce and distribute pertinent maps to the invested public. The speed with which Wyld was able to assess news events and produced an informative and new fully engraved map contributed significantly to his commercial success. Wyld's news maps, while a small subset of his large cartographic corpus, arguably represent his most significant work - forming a vital record of currently developing new events from an even-handed if Anglo-centric perspective. Such maps had an ephemeral period of interest, were separately issued, and necessarily printed in small quantities, leading to their extreme scarcity today.

This map was published in March 1861 in London by James Wyld. This map is scarce to the market. We note institutional holdings at the Boston Public Library, the Library of Congress, the Bibliothèque nationale de France, and the David Rumsey Collection, among others.