1861 Mitchell Map of Minnesota and the Dakotas 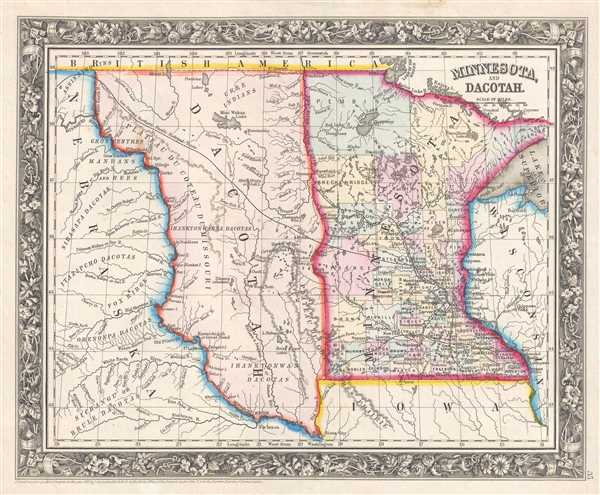 1861 Mitchell Map of Minnesota and the Dakotas

Depicts the Pembina Region - the portion of the Minnesota Territory that fell unorganized after Minnesota's statehood in 1858.

During the nearly three year period between Minnesota's statehood on May 11, 1858 and the creation of the Dakota Territory in March 2, 1861, the portion of what had been the Minnesota Territory that fell between the Missouri River and Red River, Minnesota's newly-created western border, remained unattached to any official territory of the United States. Immediately following Minnesota's statehood, a provisional government was set up in the Pembina Region which lobbied for recognition as a territory. In doing so, a formally recognized local government would be in place, which is an important part of encouraging settlement in a region. Even so, the proposal was mostly ignored by the Federal government until the Dakota Territory was formed, which upon its creation included most of present day Montana, Wyoming, and both North and South Dakota.

The Governor Stevens Route of the Transcontinental Railroad

Another important detail of this map is the inclusion of a portion of the Governor Stevens Route, which was one of the proposed routes for the transcontinental railroad. A veteran of the U.S. Corps of Engineers and the U.S. Coast Survey, Stevens was keenly aware of the pressing need for a transcontinental railroad to unite the rapidly expanding nation. As he traveled westward toward Olympia, Washington, the seat of the territorial government, Stevens surveyed what he believed was the best and most practical route for the Pacific Railroad. Starting from St. Paul, Minnesota, Stevens surveyed and proposed a route that roughly following the 47th and 49th parallels westward and terminated at Puget Sound. He boasted that the harsh winter conditions of the northern territories would 'not present the slightest impediment to the passage of railroad trains.' To this the expedition's naturalist George Stuckley responded, 'A road might be built over the tops of the Himalayan mountains – but no reasonable man would undertake it.' Though the Stevens route appears on many early maps, it was not seriously entertained by any rational party other than Stevens himself. Following Stevens' death in 1862 during the Civil War Battle of Chantilly, the campaign for a far northern route lost its only champion and consequently its momentum. Nonetheless, the northern Pacific route was eventually completed, and Ulysses S. Grant drove the 'Golden Spike' in western Montana on Septemer 8, 1883.

Highly detailed, particularly for a map of a state that was only a few years old when it was created, individual counties in Minnesota are illustrated, labeled, and color coded for easy differentiation. County seats are labeled as well, along with numerous rivers and lakes. In the Pembina Region (Dacotah), the ranges of Native American tribes are labeled, and the ephemeral nature of these ranges are hinted at due to the fact that there are no defined borders. Rivers lakes, and creeks within the region are also labeled. The Nebraska Territory is illustrated in much the same manner, with the ranges of Native American tribes, rivers, and creeks labeled throughout. The whole is surrounded by the attractive floral border common to Mitchell atlases between 1860 and 1865.