1839 Netherchit Missionary Map of the World w/ Republic of Texas 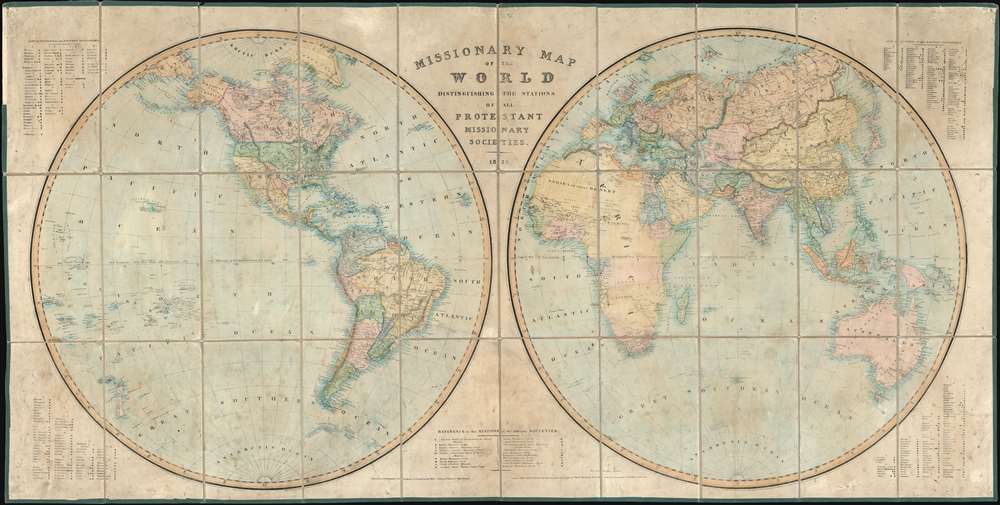 1839 Netherchit Missionary Map of the World w/ Republic of Texas

Illustrates the support of European Missionaries for the Repubic of Texas before any offical recognition.
$3,500.00

This is a rare and enormous 1838 missionary map of the world by John B. Netherchit and the Church Missionary Society. The map, published at the down of the Victorian Era, covers the world in a dual hemisphere projection and is noteworthy for its in-depth presentation of the global protestant missionary situation, and its early and significant support for the nascent Republic of Texas, declared just 2 years prior. Keyed at the corners and at bottom center, there is elaborate coding system identifying 19 different missionary societies and their stations throughout the globe, providing an outstanding overview of Protestant Missionary activity in the early-middle 19th century. Many remote towns and indigenous villages that do not commonly appear on other maps are noted here - suggesting deep knowledge of geography drawn from unique missionary sources.

The publication of this map is attributed to the Church Mission Society. The Church Missionary Society, or CMS, is a British mission society working with the Anglican Communion and Protestant Christians around the world. Founded in 1799, the CMS can trace its origins to the visions of George Uday, Charles Grant, and David Brown, all officers of the British East India Company. The society absorbed several smaller and foreign missionary societies into its embrace. The first missionaries were sent out in 1804 and the society expanded its missionary work aggressively throughout the first half of the 19th century, reaching remote areas throughout Asia, Africa, and the Americas. By 1838, when this map was issued, the society Lay Secretary Dandeson Coates (1778 - 1846) determined that it was necessary to provide donors with an up-to-date overview of global missionary activity. He reached by letter out to missionary societies throughout Europe for the most up-to-date data, all of which was incorporated into this map.

The Missionary Society was not the cause, but rather a response to a broad evangelical awakening in Europe. It emerged during an era when missionary work had not just religious significance, but also deep political implications. As European explorers mapped the world, missionaries followed, living in the newly opened territories where they proselytized not just European religions, but also pushed for indigenous populations to embrace Euro-centric social, economic, and political mores. Thus, it has been argued that 'while the colonial governments traded, the missionaries evangelized and trained and educated leaders for government service.' Missionaries were a critical stage in colonial conquest and development, more often than not setting the stage for eventual colonial control, administration, and assimilation.

Recognition of the Republic of Texas

This map is significant for its recognition of the Republic of Texas, just two years after it was proclaimed, and prior to that ephemeral entity being recognized by most European powers. It was not until 1839 that King Louis Philippe of France formally recognized the Republic of Texas, becoming the first European government to do so. While the Republic of Texas does appear on French maps postdating the official recognition, it does not typically appear on English maps, like the present map. The fact that it appears here is no mistake. Protestant missionary groups generally supported the Republic of Texas and its settlement by northern European protestants as a bulwark and advancement against the predominantly Catholic Mexico. It is also of note that this map illustrates the full claims of the Republic of Texas, extending west as far as the Rio Grande and the Rocky Mountains. Although Texas claimed this territory, it does not typically appear of Republic of Texas maps predating 1846, when Texas entered the United States. Instead, most maps predating 1846 illustrate Texas according to the lands they actually controlled, a much smaller area bounded by the Nunces River. The addition of the full ROT claims suggest further support from the Missionary fathers for Texas.

This map was issued in 1838 by the Church Missionary Society. It was engraved and printed by John B. Netherchit in London. Some have argued that the cartographic work is that of George Frederick Crutchley, but we have found only limited justification for this claim. Some examples (not the present map) of this map are accompanied with an original slipcase identifying the 'Crutchley Map Establishment,' but it is odd for an entrepreneurial and self-promoting mapmaker like Crutchley to not add his name to any map he produced. Unless more evidence of Crutchley's involvement with this map is forthcoming, we believe it is more likely Crutchley merely acted as an agent and retailer of the map.

Reasonably rare. The OCLC identifies 8 examples in institutional collections. This map is uncommon on the market

John B. Netherchit (fl. c. 1835 - 1855) was a London based lithographer active in the middle part of the 19th century. Netherchit was based at 23 King William Street, West Strand. His work is often associated with missionary publications. Learn More...

Very good. Some soiling. Dissected and mounted on oriignal linen. Some wear to linen fold lines.

National Library of Australia, MAP RM 17. OCLC 224100069
Looking for a high-resolution scan of this?