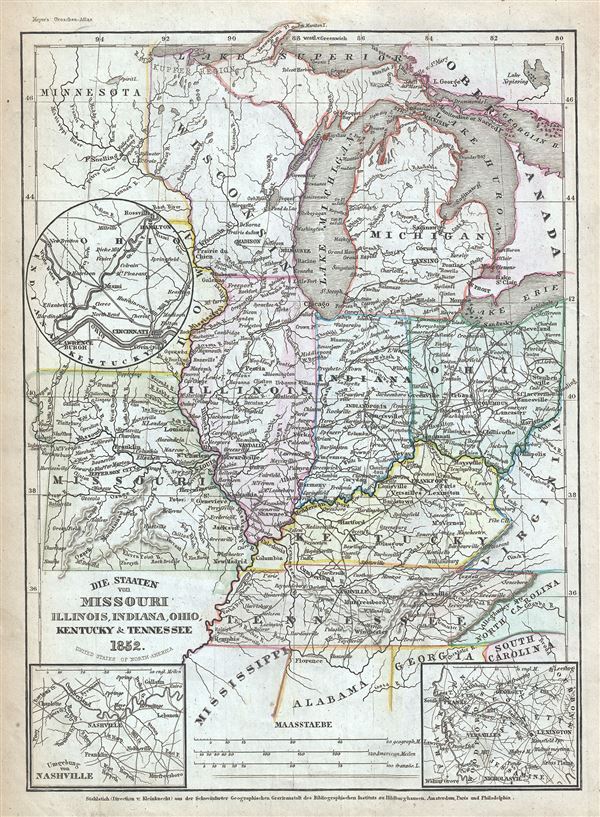 This is a fine example of Joseph Meyer's 1852 map of the American Midwest. It covers the states of Missouri, Illinois, Indiana, Ohio, Michigan, Wisconsin, Kentucky and Tennessee as well as parts of Minnesota. Three inset maps are also included, detailing Nashville and vicinity, Franklin and vicinity and Cincinnati and vicinity. The map notes several towns, rivers, railway, roads and other topographical features. Great Lakes are well represented with Lake Michigan and Lake Superior appearing in full, while Lake Erie and Lake Superior are depicted only partially.

This map was issued at the height of the American westward expansion. A few years before this map was drawn the California gold discovery of 1849 enticed thousands to embark upon the rigorous transcontinental emigration. Meanwhile, with the rise in territorial population to the west of the Mississippi, the eastern states were becoming increasingly divided over the issues of slavery and state vs. federal sovereignty. Within five years these disputes would lead to the American Civil War. The Missouri Compromise which allowed Missouri to become a slave state stipulated that no future state north of Missouri's southern border could enter the Union as a slave state. Though the Compromise briefly alleviated north-south tensions, it would only last until 1854 when the Kansas-Nebraska Act nullified the Missouri Compromise, setting the stage for the Civil War. Because it was centrally located, Ohio was strategically important to the war efforts of both the Union and Confederacy. The Ohio River and its attendant railroads were vital for the movement of troops and supplies. Indiana, which sided with the Union, was the first state to mobilize for the war effort and its soldiers were present in all major battles. Although many major Civil War battles were fought in Tennessee, Kentucky officially remained 'neutral' throughout the war.

Very good. Minor overall toning and some foxing at places.