1859 Dufour Map of the Ancient World 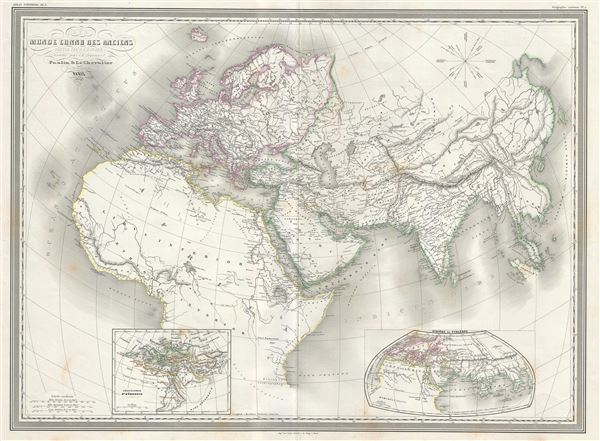 1859 Dufour Map of the Ancient World

This is an uncommon and attractive large 1859 elephant folio map of the Ancient World, including Asia, Europe and Africa by A. H. Dufour. The map shows the World during the time of the Ancient Roman Empire from the Atlantic Ocean to Burma in Asia and from the Indian Ocean to the North Sea. Includes all of Europe, Arabia, part of Asia including the Indian Subcontinent and the northern part of Africa. An inset in the lower left quadrant depicts the World according to Herodotus. Another inset in the lower right quadrant depicts the World according to Ptolemy.

The Empire was established in 27 BC after Gaius Julius Caesar Octavianus, the grandnephew and heir of Julius Caesar was awarded the honorific title of Augustus. During the time of the empire, Roman cities flourished. Trade spread as far as India, Russia, China and Southeast Asia. However, the sheer size of the empire and its success also contributed to its downfall. The Western Roman Empire collapsed in AD 476, when Romulus Augustulus was deposed by the German Odovacer. The eastern Roman Empire, evolving into the Byzantine Empire, survived until the Ottoman Turks captured Constantinople in 1453.

The map shows Scythia Intra Imaum and Scythia Extra Imaum, the region of Scythia as it was known during the time of the Roman Empire, divided by Mount Imaum, denoting the whole of Northern Asia. The map also shows Libya Interior in Northern Africa.