1956 J. B. Jannot Chocolates Menier Pictorial Map of the World 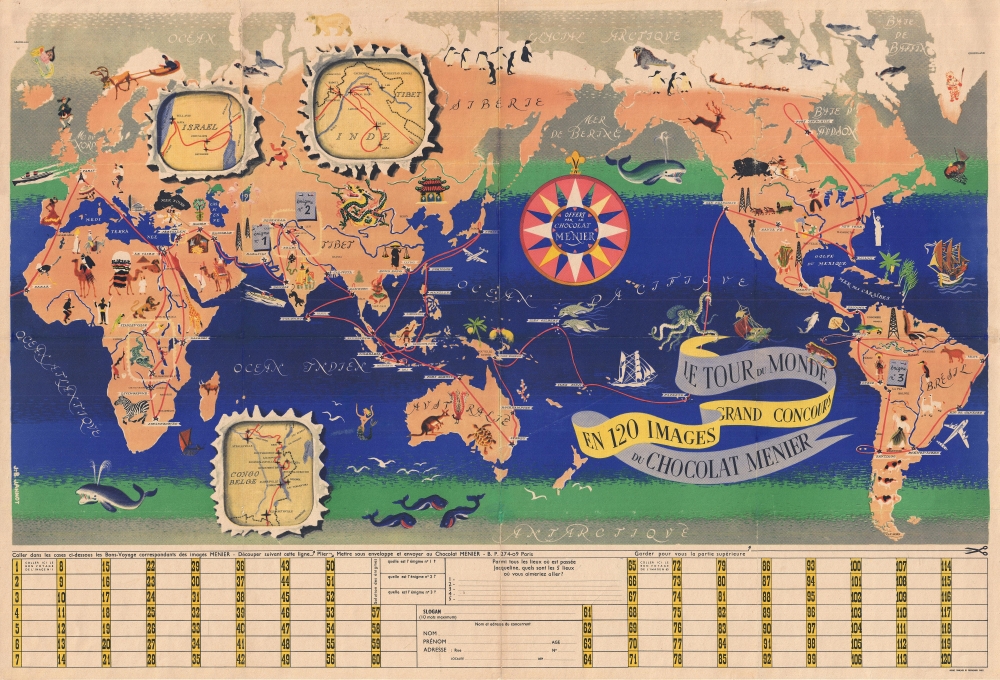 1956 J. B. Jannot Chocolates Menier Pictorial Map of the World

This is a stunning 1957 pictorial map of the world drawn by J. B. Jannot and issued by Chocolat Menier to boost interest in the fading French chocolate giant. The map allows its reader to follow Jacqueline, Chocolat Menier's adorable 'little girl' mascot, on a great tour du monde (tour of the world) starting and finishing in Paris. There are 120 destinations, most highlighted with striking graphic imagery. Destinations were associated with tickets given out in bars of Menier Chocolate. As they were collected, the full 120 vouchers could be pasted on the board at the bottom of the map. These would give clues to solving three 'enigmas,' also built into the board. Once completed, the bottom 'board' section could be cut off and mailed to Chocolat Menier, where they would be entered into a competition – possibly a drawing.

Chocolat Menier was founded in 1816 as a pharmaceutical supply house specializing in chocolate, which was then used only medicinally. Around 1893 the company hired Firmin Bouisset to promote their chocolate as a recreational treat. They came up with the image of an innocent young girl, Jacqueline, writing graffiti on a wall with a piece of Menier chocolate. They exhibited at the 1893 Chicago World's Columbian Exposition as one of the largest chocolate companies in the world. Nonetheless, by the 1950s, faced with growing local and international competition and suffering under mismanagement, the company fell upon hard times. It was around this time that the present promotional was produced.

This map was drawn by J. B. Jannot. It is one of two maps drawn by Jannot for Chocolat Menier, the other being a map of Europe and Asia, also with 120 tickets and a 'journey' theme. Both were published by the Agence Française de Propaganda. The poster proved popular but insufficient to revive Menier's status. Chocolat Menier was sold and passed through numerous hands. Today the brand is owned by the Swiss chocolate conglomerate Nestlé. This map can occasionally be found without the lower 'cut off' portion, but the present example, with the full board, is exceptional and rare.