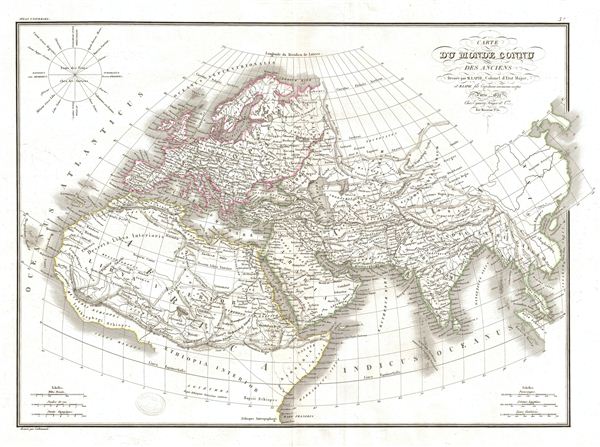 A fine first edition example of M. Lapie's 1832 map of The Ancient World, including Asia, europe and Africa. The map shows the Ancient World from the Atlantic Ocean to Burma in Asia and from the Indian Ocean to the North Sea. Includes all of europe, Arabia, part of Asia including the Indian Subcontinent and the northern part of Africa. The map indicates the region of Sarmatia europea separated from Sarmatia Asiatica by the River Tanais (River Don) in Russia. The map also shows Scythia Intra Imaum and Scythia extra Imaum, the region of Scythia as it was known during the time of the Roman empire, divided by Mount Imaum, denoting the whole of Northern Asia. The map also shows the Libyan Desert and Libya Interior in Northern Africa. The upper right corner contains a wind rose.

This map was engraved by Armand Joseph Lallemand as plate no. 03 in the first edition of M. Lapie's important Atlas Universel. This map, like all maps from the Atlas Universel features an embossed stamp from the Lapie firm.