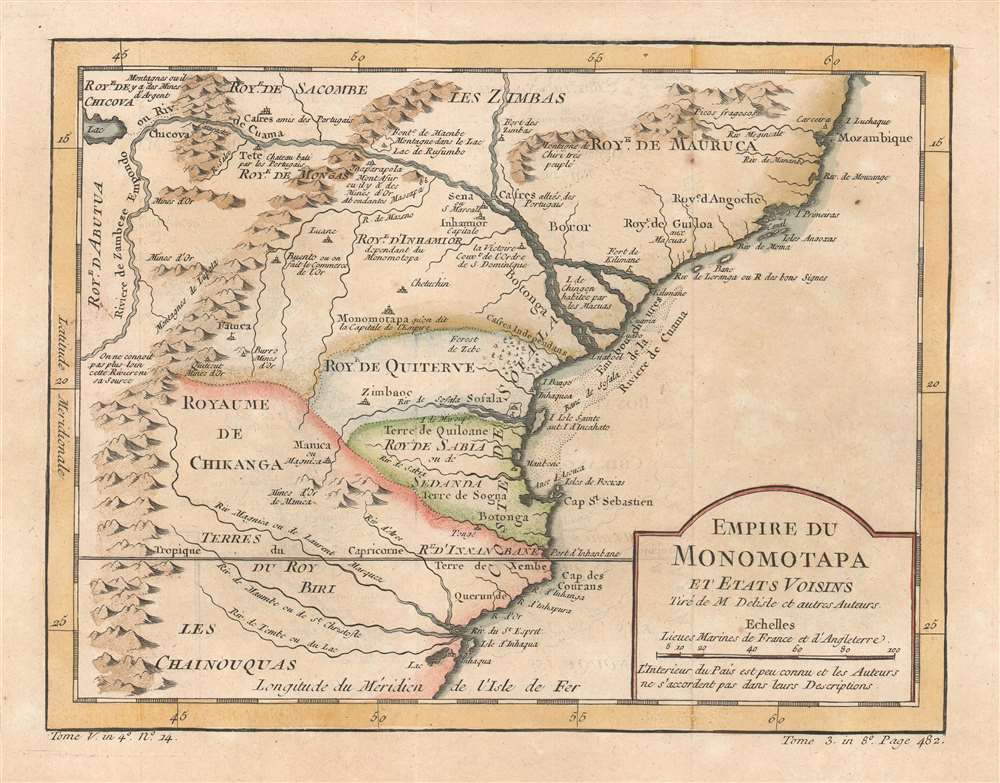 Depicts a great African kingdom that was slowly dismantled by civil war and Portuguese colonial interests.
$250.00

This is a 1780 Jacques-Nicolas Bellin map of southeastern Africa. Centered on modern-day Mozambique, the map depicts part of the Kingdom of Mutapa, a vast empire that dominated parts of southern Africa from 1430 - 1760. Smaller kingdoms, the Kingdom of Quiterve, the Kingdom of Sabia, and the Kingdom of Chikanga, are also identified. The Zambezi River and its delta, also labeled here as the Cuama River, dominates the upper portion of the map. Short comments provide some context and label certain peoples as being 'friends of the Portuguese,' the region's gold mines, and a castle built by the Portuguese at Tete.

The Kingdom of Mutapa, labeled here by its Portuguese name Monomotapa, was an African kingdom that encompassed portions of modern-day Zimbabwe, Zambia, Mozambique, and South Africa. Monomotapa, the Portuguese name for the kingdom, is likely a transliteration of Mwenemutapa, an African royal title, that combines Mwene meaning King and Mutapa meaning land. The kingdom's origins are unclear, as oral tradition leaves us with at least two different versions of its genesis. Nonetheless, the kingdom expanded from its founding in 1430 until 1480, when it reached its fullest extent. The Portuguese first made contact around 1512 and entered into formal relations with the kingdom in the 1560s. The first vestiges of Portuguese control arrived in 1629, when the Mwenemutapa failed in his attempt to throw out the Portuguese, was in turn deposed, and replaced by a pro-Portuguese king. This led to treaties ceding the kingdom's gold mines and making it a Portuguese vassal, but these provisions were never carried out. It was not until 1759, during a civil war for the throne, that the kingdom never recovered. The 'winners' of this war ruled a much-reduced kingdom independently of the Portuguese until 1917 when the last king of the dynasty, Mambo Chioko, was killed in battle against the Portuguese.

Originally created for of Abbé Prévost's Histoire Générale des Voyages by Jacques-Nicolas Bellin, this map was published by Jean François de La Harpe's in his Abrégé de l'Histoire Générale des Voyages in 1780. Two examples of the 1780 edition of this map are cataloged in OCLC. They are part of the institutional collections at Universitätsbibliothek München in Munich and Bayerische Staatsbibliothek, also in Munich. Another example is part of the collection at the University of Illinois Urbana-Champaign. The works by Prévost and de la Harpe are well represented institutionally.