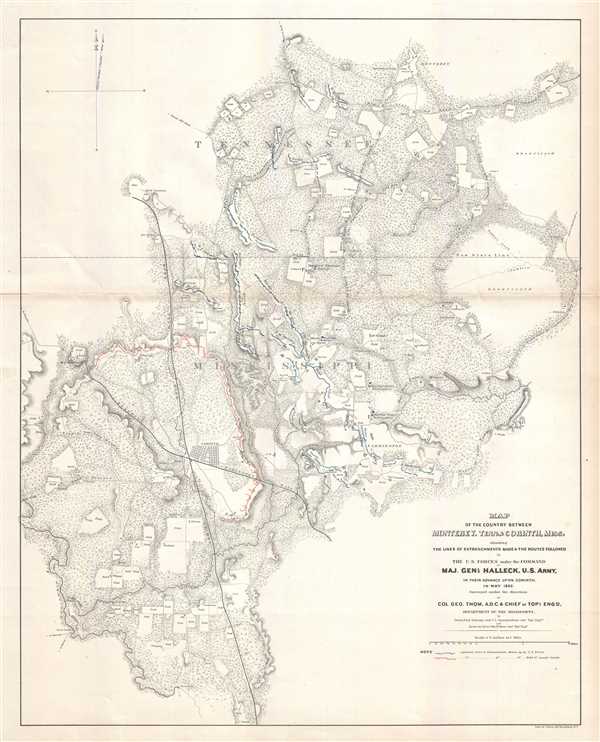 Also known as the First Battle of Corinth, the Union Army seized the important railroad junction at Corinth, Mississippi.
$550.00

This is a separate issue 1862 Otto H. Matz map of the movements of the troops under the command of Major General Henry Halleck leading to the capture of Corinth, Mississippi in May 1862 during the American Civil War. The map depicts the region from Cane Creek and the Tuscumbia River to Springer, Tennessee and Johnston, Mississippi and from Monterey, Tennessee to the George homestead in Mississippi. Illustrating the advance of the three armies under General Halleck's command, each route from the vicinity to Corinth is labeled, along with waypoints between the two towns where each army stopped to construct fortifications. Both Union and Confederate fortifications are illustrated, with Union fortifications noted in blue and Confederate fortifications surrounding Corinth illustrated in red. Fields and homesteads throughout this extremely rural portion of the country are illustrated and labeled, creating an intriguing image of how the Civil War invaded the lives of everyone, particularly in the South, even those who were not in uniform.

A 'tedious' advance influenced by the heavy losses at Shiloh, Halleck ordered his men to fortify positions all along their route, in case of a surprise attack by Confederate forces. Eventually Halleck and his armies reached Corinth, Mississippi, an important rail junction where the Mobile and Ohio Railroad and the Memphis and Charleston Railroad met. Rail transportation played an integral role throughout the entire Civil War, making rail junctions, like the one at Corinth, important strategic targets for both sides. The Confederate commander at Corinth, General P.G.T. Beauregard, knew that his force was outnumbered and suffering from disease. This made the effective defense of the city nearly impossible and could lead to the utter destruction or capture of his army.

Beauregard, in a brilliant tactical move, tricked the Union commanders and managed to spirit away his army by night. Beauregard managed this by giving some of his men three days' rations and ordering them to prepare for an attack. This order, as expected, made its way to Union forces by way of a Confederate soldier or two. Beauregard then launched an artillery bombardment, a move that usually preceded a battle. However, instead of fighting, on the night of May 29, Beauregard withdrew his army to Tupelo, Mississippi, and took advantage of the Mobile and Ohio Railroad to evacuate the sick and wounded, using fake camp fires and dummy guns in the defensive works to maintain the ruse. When Union patrols entered Corinth of May 30, they found the city deserted. Beauregard and his army had lived to fight another day.

This map was surveyed by Frederick Schraag and Charles Spangenberg, drawn by Otto H. Matz, and published in 1862. While represented in institutional collections, this map is rarely seen on the market.

Otto H. Matz (March 8, 1830 - March 8, 1919) was an American architect and an American Civil War veteran. Born in Berlin, Matz arrived in Chicago in 1854 and became an architect for the Illinois Central Railroad and the Chicago and Alton Railroad. Matz designed the first Union Station built in Chicago, that was unfortunately destroyed by the great Chicago fire of 1871. He served as an engineer in the Union Army during the American Civil War, during which he was a member of the staffs of Generals Fremont, Hallock, and Grant. He worked on the plans fro the capture of Vicksburg and entered the city with General Grant. After the war, Matz returned to Chicago and acted as the school architect of Chicago from 1869 until 1871. After the Chicago fire, Matz participated in the competition for a contract to construct the new city hall and county buildings and won first prize, though he was not awarded the contract. In 1892, Matz was the County Architect and was responsible for building the criminal court building. Matz married Mary Elizabeth Lewis on October 26th, 1857, with whom he had two sons and a daughter. Matz's obituary in the Chicago Tribune that three of his grandsons served in World War I. Learn More...


Charles Spangenberg (fl. c. 1862 – 1864) was an assistant topographical engineer active with the Union Army during the American Civil War. His name is attached to at least one important Civil War manuscript maps, that being a map of the Battle of Vicksburg. He may be the same Charles Spangenberg who moved with his brother Frederick Spangenberg to Woodbury Minnesota, possibly benefiting from a Civil War pension, in 1869. If so, the farmhouse he built is now on the national register of Historic places. Learn More...