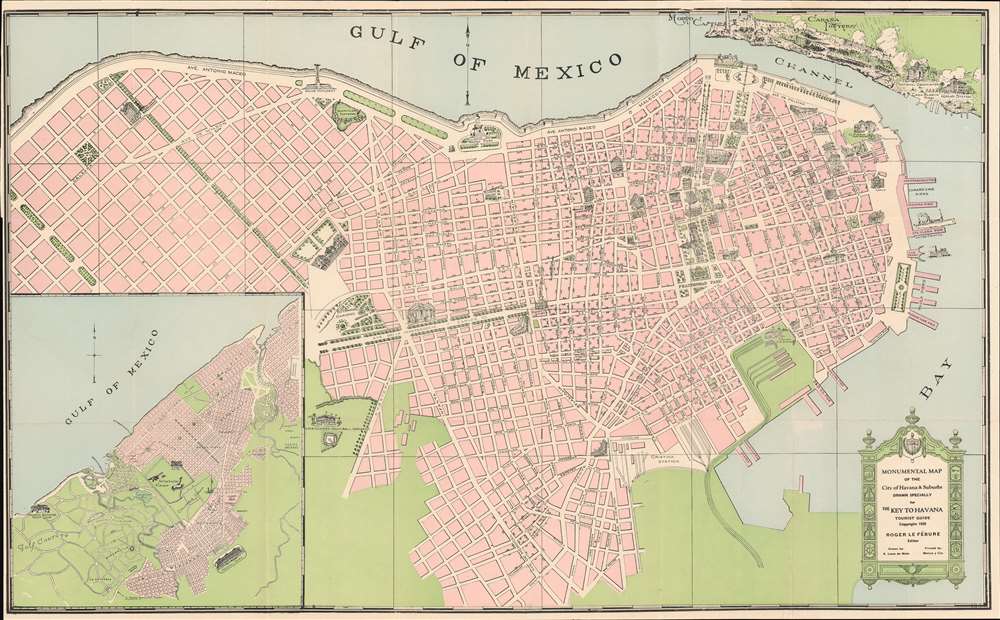 A monumental map of Havana, Cuba in the tradition of tourist maps created for European capitals.
$300.00

This is a 1928 Antonio Loret de Mola pictorial map of Havana, Cuba. The map depicts the city from Villalón Park and the Avenida Paseo to Havana Harbor and from Morro Castle, La Cabaña Fortress, and the Entrance Channel to Cristina Station. Beautifully illustrated, numerous sites around the city are illustrated in profile, including several hotels, the Congress building, the House of Representatives, the National Library, the National University, and the national theatre. Monuments throughout the city are also shown, including the Maine Monument, which was erected in 1925 in remembrance of the victims of the USS Maine, and the monument to Antonio Maceo Grajales, the second-in-command of the Cuban Army of Independence. Special attention is paid to Havana's fortresses, such as the La Cabaña (Fortaleza de San Carlos de la Cabaña), the third largest fortress in the Americas, and Morro Castle (Castillo de Los Tres Reyes del Morro). City parks, illustrated in green, are scattered all around the city. An inset map situated in the lower left corner focuses on western Havana and highlights the 'aviation field', Columbia Camp, and the Havana Biltmore Yacht Club.

This map was drawn by Antonio Loret de Mola and lithographed by Pedro Gutiérrez in 1928. This is the only known surviving example of the 1928 edition.

Very good. Exhibits light wear along original fold lines. Blank on verso.
Looking for a high-resolution scan of this?