1845 Bradford Views of the Moon 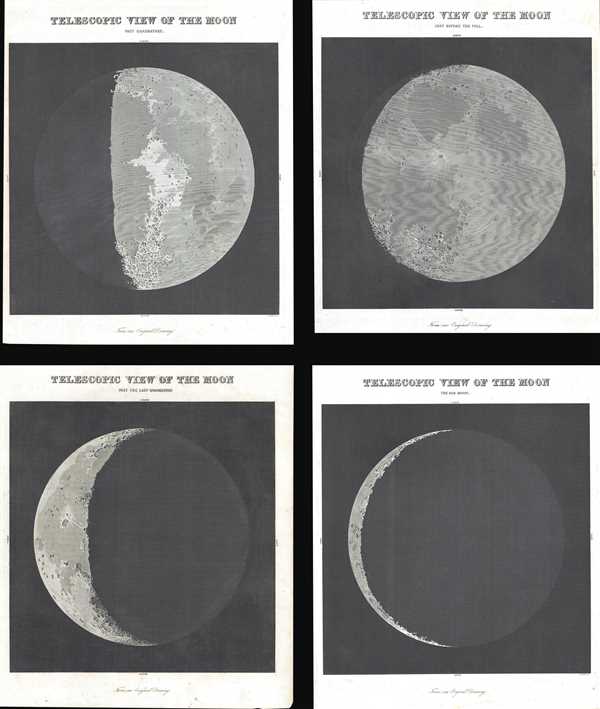 1845 Bradford Views of the Moon

A set of four incredible views of the moon in four different phases.
$500.00

This is a set of four (4) 1845 Duncan Bradford views of the moon. Each view illustrates the moon in a different phase, with the visible portion of the pale-gray of the moon contrasting beautifully with the blackness of space. Each view bears a caption stating that it was engraved from an original drawing and is oriented with north toward the top of each page. The maria (the open 'plains' created by solidified lava flows) and craters are clearly visible. Though each view may appear slightly different, the same side of the moon is always facing toward the Earth, meaning that the features on the surface of the moon will rarely change from this point of view.

These views were engraved by John Wykeham Archer and published in Duncan Bradford's The Wonders of the Heavens… in 1845.

John Wykeham Archer (1808 - May 25, 1864) was a British writer, artist, and engraver. Born in Newcastle-upon-Tyne, in 1820 Bradford moved to London where he studied with John Scott, a noted engraver of animals. Scott, however, fell ill, which forced Bradford's apprenticeship to be cut short and he decided to return to Newcastle. While in Newcastle, Bradford collaborated with William Collard on a series of large plates of Fountains Abbey based on drawings by John Wilson Carmichael. Bradford also produced several plates on his own for Mackenzie's History of Durham. After a short time in Edinburgh, Bradford returned to London in 1830 and entered the studio of the engravers William and Edward Finden. After a few years, however, the market for the kind of work done by the Findens declined, and Bradford found work engraving plates for the New Sporting Magazine. At some point Bradford was elected as a member of the New Society of Painters in Water Colours, he began creating work in this vein, including a series of drawings of St. Mary Overy, before its restoration. Soon, Bradford had amassed a more than one hundred drawings of London antiquities and offered them to the British Museum, which declined the collection. Nonetheless, he successfully sold them to William Twopenny, who also commissioned Bradford to continue making twenty more similar drawings each year. The British Museum then acquired the entire collection from Twopenny's estate in 1874. Archer also created drawings for wood engravings that were published in the Illustrated London News and several other publications. He was also a regular contributor to the Gentleman's Magazine. Bradford also claimed that he had revived the practice of engraving monumental brasses, and even produced several monuments of this type from his own designs. He also painted a few works in oil over the course of his career. Learn More...

Bradford, D. The Wonders of the Heavens, Being a Popular View of Astronomy, Including a Full Illustration of the Mechanism of the Heavens; Embracing the Sun, Moon, and Stars, with Descriptions of the Planets, Comets, Fixed Stars, Double Stars, the Constellations, the Galaxy, or Milky-Way, the Zodiacal Light, Aurora Borealis, or Northern Lights, Meteros, Clouds, Falling Stars, Aërolyts, etc. (Boston: Otis, Broaders, and Co.) 1845.

Set of four (4) views of the Moon. Some display closed margin tears that have been professionally repaired on verso. All display some age toning. All blank on verso.
Looking for a high-resolution scan of this?