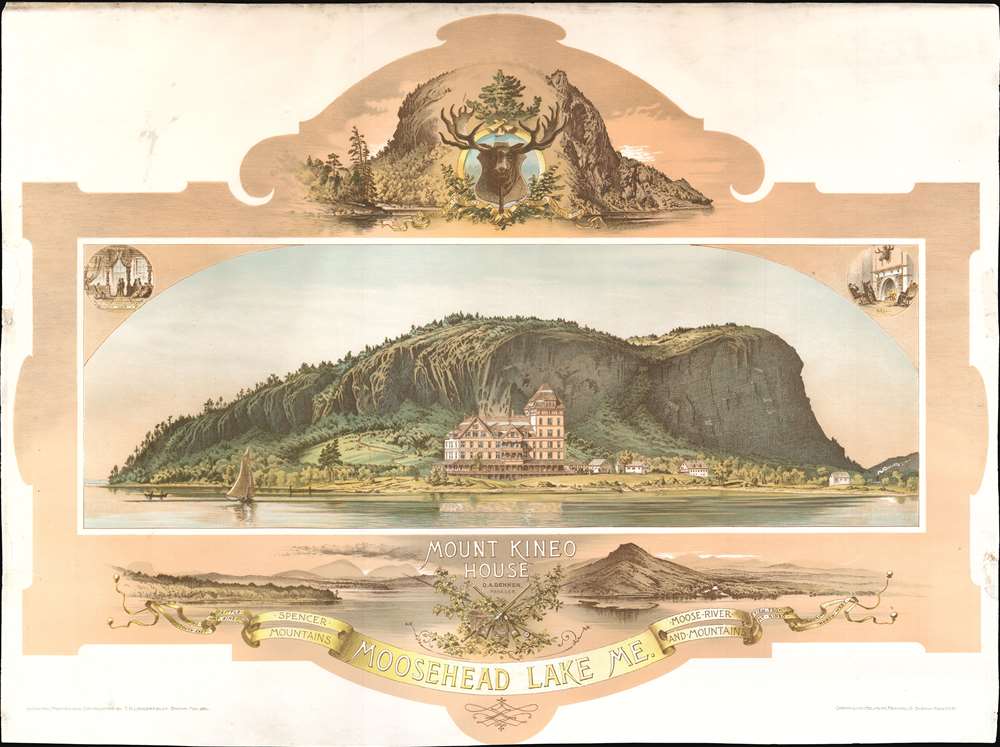 A rare 1886 Theodore Otto Langerfeldt promotional chromolithograph view of Mount Kineo House, a former resort lodge on Maine's Moosehead Lake. The map looks northward towards Mount Kineo and Kineo House from a position across the lake. The view emphasizes Mount Kineo's 800-foot-high cliffs and exceptional beauty. Kineo House itself take center stage - here in its 3rd iteration, as openend in 1884. Above the map there is a moose head, an icon of the hotel that once presided over the fireplace in the hotel's great hall.

Mount Kineo House, as illustrated here, is the third lodge to occupy this location. The first Mt. Kineo House, built by Capt. Joshua Fogg in 1848, was a three and a half story tavern and inn with a wraparound veranda. It was destroyed by a fire in 1868. The Second Kineo House, a large five story inn with annex buildings, was opened in 1871 and itself destroyed by fire in 1882. The third house, illustrated here, opened in 1884. The present view, from 1886, was probably intended to celebrate the opening and promote the luxurious new property. The third Kineo House went through multiple upgrades and expansions, dramatically altering its footprint and turning it into a grand hotel by 1911. The building illustrated here predates most of these, but is described in a contemporary phamplet ,

This hotel is planned on an ample scale and believed to be second to none in construction, general arrangement and convenience, as well as in its provision for the security and comfort of its guests. The dining room is 100 x 51 feet, seating four hundred people. Particular attention has been paid to the sanitary arrangements and drainage. The sleeping rooms are large, light, all provided with the best of mattresses and springs, and reached by broad stairways or steam elevator. Every room commands an excellent view of lake and mountain scenery. A piazza fifteen feet wide extends around the main house.

Kineo House was ultimately demolished in 1938, when the property sold. Today it is the site of a golf course but some of the annex properties still exist.

This view was drawn by Theodore Otto Langerfeldt, a well-known architectural and view artist based in Boston. Langerfeldt was considered to be expensive in his day, suggesting that the publisher, and likely the hotel, lavished money on this production. It was printed in chromolithogph in Boston by the Heliotype Printing Company. Examples are rare. We are aware of one at the University of Southern Maine Osher Library and another at the Boston Athenaeum. There is at least one other in private hands.

Theodore Otto Langerfeldt (March 2, 1841 - September 7, 1906) was a German-American painter active in the second half of the 19th century. Langefeldt was born in Buckeburg, Schaumburg-Lippe, Germany. He studied architecture at the Hanover Polytechnic School before moving to London. He immigrated to the United States in 1868, settling in Boston. His paintings are primary watercolors and focused on architecture - one of which one a price at the 1876 Philadelphia Centennial Exposition. He also worked with several New England viewmakers, among them Ackermann, creating bird's-eye views of Boston and Mount Kineo (Maine). Langerfeldt, as a commercial artist, was considered expensive by his contemporaries, but was always in demand. Learn More...


The Heliotype Printing Company (1872 - c. 1900) was a printing company based in Boston. The company was promoted as 'artistic printers by the best photogelatine and photolithographic processes.' They were reorganized in 1885, adapting chromolithographic and photo reprographic techniques. They remained active until at least the 1930s. Their offices were located at 211 Tremont Street, Boston. Learn More...