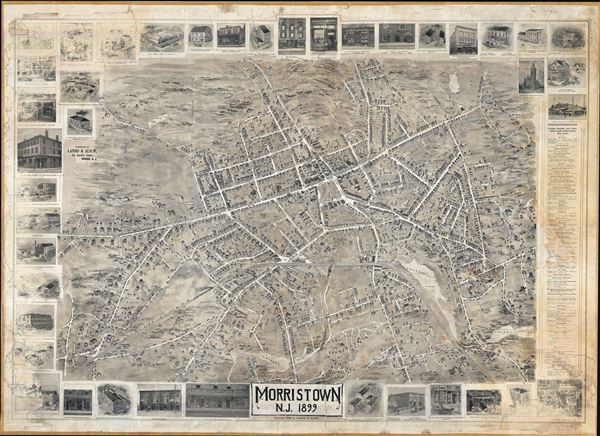 Scarce birds-eye view of Morristown - one of the first such views to incorporate photography.

An extremely scarce and dramatic large format 1899 view of Morristown, New Jersey. Prepared by the Newark firm of Landis and Alsop, this view depicts Morristown from somewhere high above the eastern part of town looking west. The Morristown Green is located prominently at center. Throughout individual buildings and business are drawn in with impressive attention to detail. The view is surrounded by photographs and engravings of various local businesses and landmarks - and as such is one of the view early view's to incorporate the new technology of photography! A reference table on the right hand side of the mail details leading business and professional people in Morristown, including architects, attorneys, stationers, cobblers, butchers, carpenters, grocers, judges, tailors, etc. This view is exceedingly rare with the OCLC only identifying two other known examples, both in institutional collections.

Landis and Alsop (fl. c. 1899 - 1934) were American view makers and postcard artists based in Newark, New Jersey in the latter part of the 19th and early 20th centuries. The firm was founded by Alfred S. Landis. Landis would often climb hills, trees, to the top of buildings, and even carried a small latter to get enough elevation to make his views. The second name in the firm, Alsop, is a bit of a mystery, but according to his surviving family members, he did have an apprentice, a New York State Trooper, who he intended would take over his business. This may or may not have been Alsop, but we think it unlikely, given that most of the 'Landis and Alsop' work is early in Landis' career. Landis died in 1860 having relocated to Florida to enjoy his retirement. Most of their work focused on these regions with known views of Morristown, Allentown, Atlantic City, Buffalo, Easton, Elmira, and Binghamton. Most of their views appeared between 1899 and 1902. Other non-cartographic work, including a significant corpus of postcards, was published until about 1920. Learn More...

Good. Professionally restored and cleaned. Large water stain on right side. Some loss and mansucript infill. Re-backed on archival canvas.