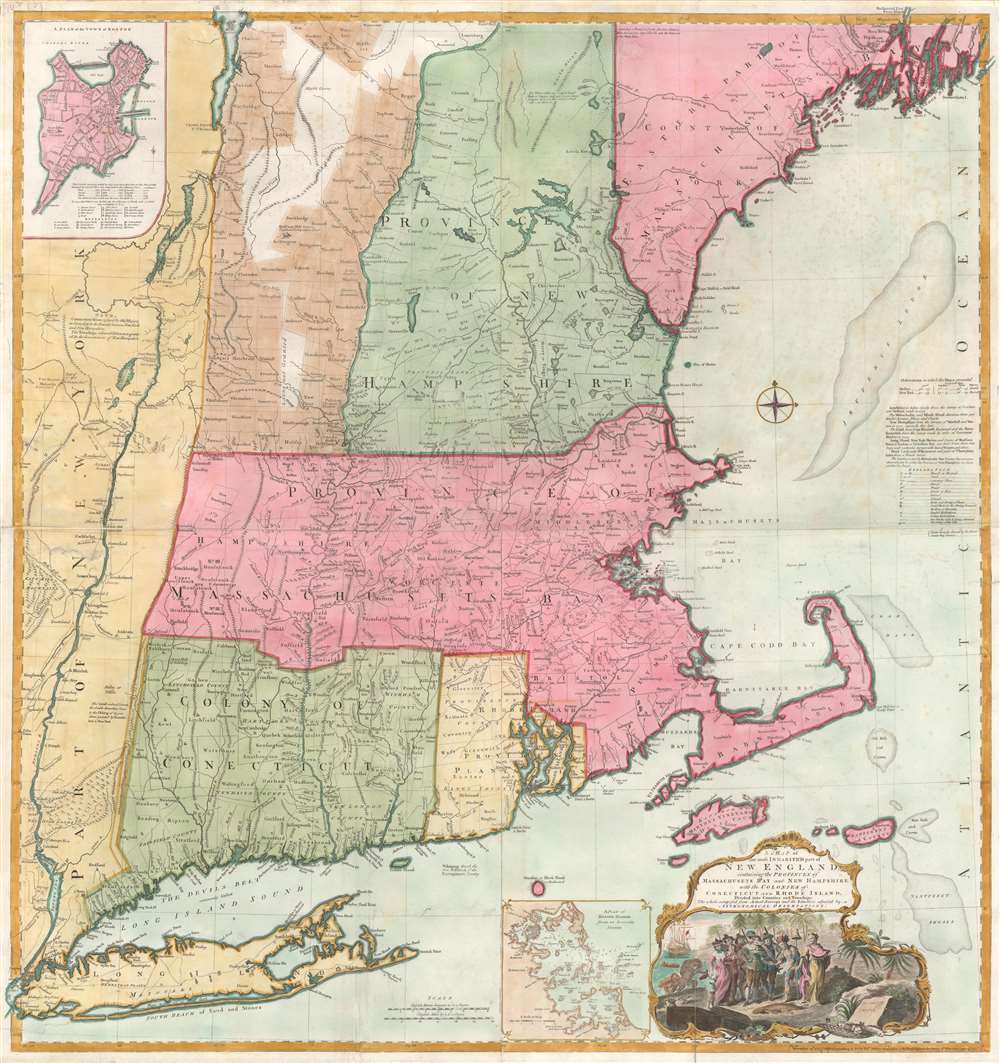 The most important and influential 18th century Colonal Era map of New England.
$7,000.00

A highly significant map, this is the 1774 'Jefferys' Map' of the Most Inhabited Part of New england. Centered on the Massachusetts Bay Colony, this map covers from Long Island to Lake Champlain and from the Hudson River to Cape Cod and Kennebec Bay, Maine. There is an inset of Boston in the upper left corner and another of Boston Harbor near the cartouche in the lower right quadrant. This scarce map was drawn by Braddock Mead (a.k.a. John Green) and published by Thomas Jefferys. It was first published in 1755 and went through at least six subsequent revisions, the present example being the third edition issued in 1774 for Thomas Jefferys' American Atlas. From the publication of the American Atlas onwards, this significant map, the most important in the Atlas, became known as the 'Jefferys Map'.

Mead's map also features a number interesting elements and notations. The Long Island Sound is alternately named the 'Devil's Belt'. Connecticut is, in various places on the map, spelled interchangeably as 'Connecticut' and 'Konektikut'. West of the Connecticut River in what would become Vermont, Mount Killington (the popular ski resort) is rendered in profile and identified as 'Kellington'. Mattituck Harbor is called 'Meridiks or Mony Tricks Harbor'. The Castkills are here labeled the 'Kats Kill Mountains'. On the Hudson River, the Tappan Zee, here identified as 'Topang Sea', is excessively large. A large decorative title cartouche in the lower right quadrant, just below Martha's Vineyard and Nantucket, depicts the pilgrims greeting a stylized American Indian at Plymouth Rock.

had a number of marked characteristics as a cartographer ... One was his ability to collect, to analyze the value of, and to use a wide variety of sources; these he acknowledged scrupulously on the maps he designed and even more fully in accompanying remarks. Another outstanding characteristic was his intelligent compilation and careful evaluation of reports on latitudes and longitudes used in the construction of his maps, which he also entered in tables on the face of the maps ... Mead's contributions to cartography stand out ... At a time when the quality and the ethics of map production were at a low ebb in England, he vigorously urged and practiced the highest standards; in the making of maps and navigational charts he was in advance of his time. For this he deserves due credit.