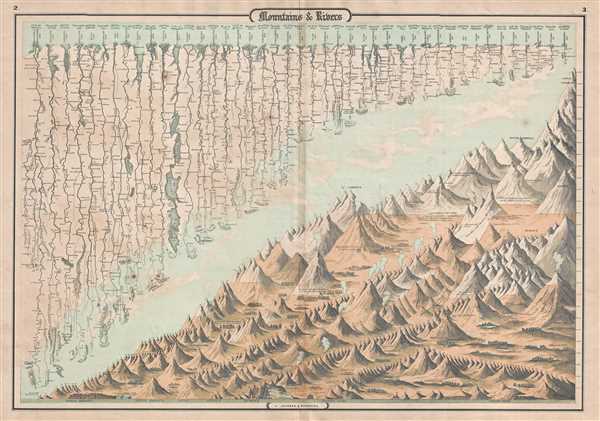 The first edition of one of the finest mountains and rivers charts of the 19th century.

One of the finest Mountains and River's Chart published in the mid-19th century. This is the 1860 first edition of A. J. Johnson and Ross C. Browning's chart or map of the relative distances of the world's great rivers and the relative heights of the world's great mountains. A multitude of details is included, such as the elevation of important cities, glaciers, volcanoes, and tree lines. The chart even includes Niagara Falls, the Great Pyramid, St. Peter's Basilica in Rome, and St. Paul's in London. The Missouri and Mississippi Rivers are deemed to be the longest in the world, followed by the Amazon. Kunchinjinga in the Himalayas is recognized as the world's tallest mountain, as this chart predates the discovery of Everest. It is extremely rare to find this map such fine condition as this one because it was issued at the front of Johnson's Atlas, where most of the heavy damage from moisture, soiling, and general use was sustained. The whole is surrounded by the strapwork border used for Johnson's atlas maps from 1860 to 1863.

Based upon a similar map copyrighted by J. H. Colton in 1855, this chart was published by A. J. Johnson and Ross C. Browning as plate nos. 2-3 in the 1860 first edition of Johnson's Family Atlas.