1854 Mitchell Comparitive Chart of the World's Mountains and Rivers 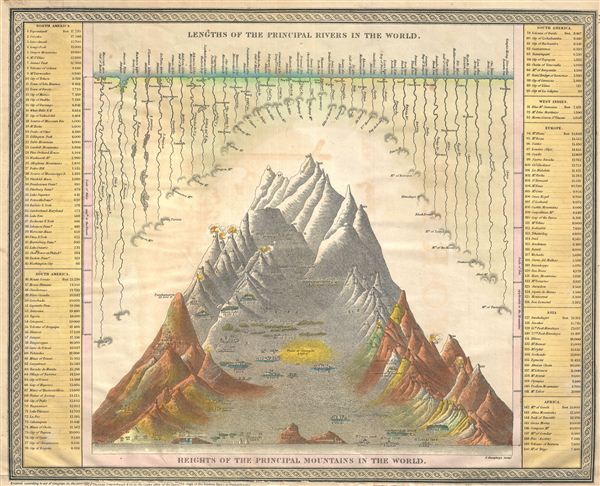 1854 Mitchell Comparitive Chart of the World's Mountains and Rivers

An attractive example of Mitchells 1854 Comparative Mountains and Rivers Charts. Mitchell based his Mountains and Rivers Chart on a nearly identical map first prepared by the American engraver H. S. Tanner in 1836.. This stunning center weighted chart, built on the Finley model, makes the significant advance of incorporating both mountains and rivers with substantial scientific and statistical data. The problem with both this map and Finley's is that the center weighted style fails to express context on a local level, thus diminish the magnitude of smaller yet highly significant ranges (like the Andes or the Alps) in comparison to the majesty of the Himalayas. Mitchell published this chart in his atlas from 1846 to the late 1850s before discontinuing the series and selling his map plates to DeSilver. This map was prepared by S. A. Mitchell for publication by the Philadelphia firm of Thomas Cowperthwait & Co. as plate no. 74 in the 1854 edition of Mitchell's New General Atlas. Dated and copyrighted, 'entered according to act of Congress in the year 1850 by Thomas Cowperthwait & Co. in the Clerk's office of the eastern District of Pennsylvania.'

Good. Some offsetting and repair along the lower border - price reflects these issues..