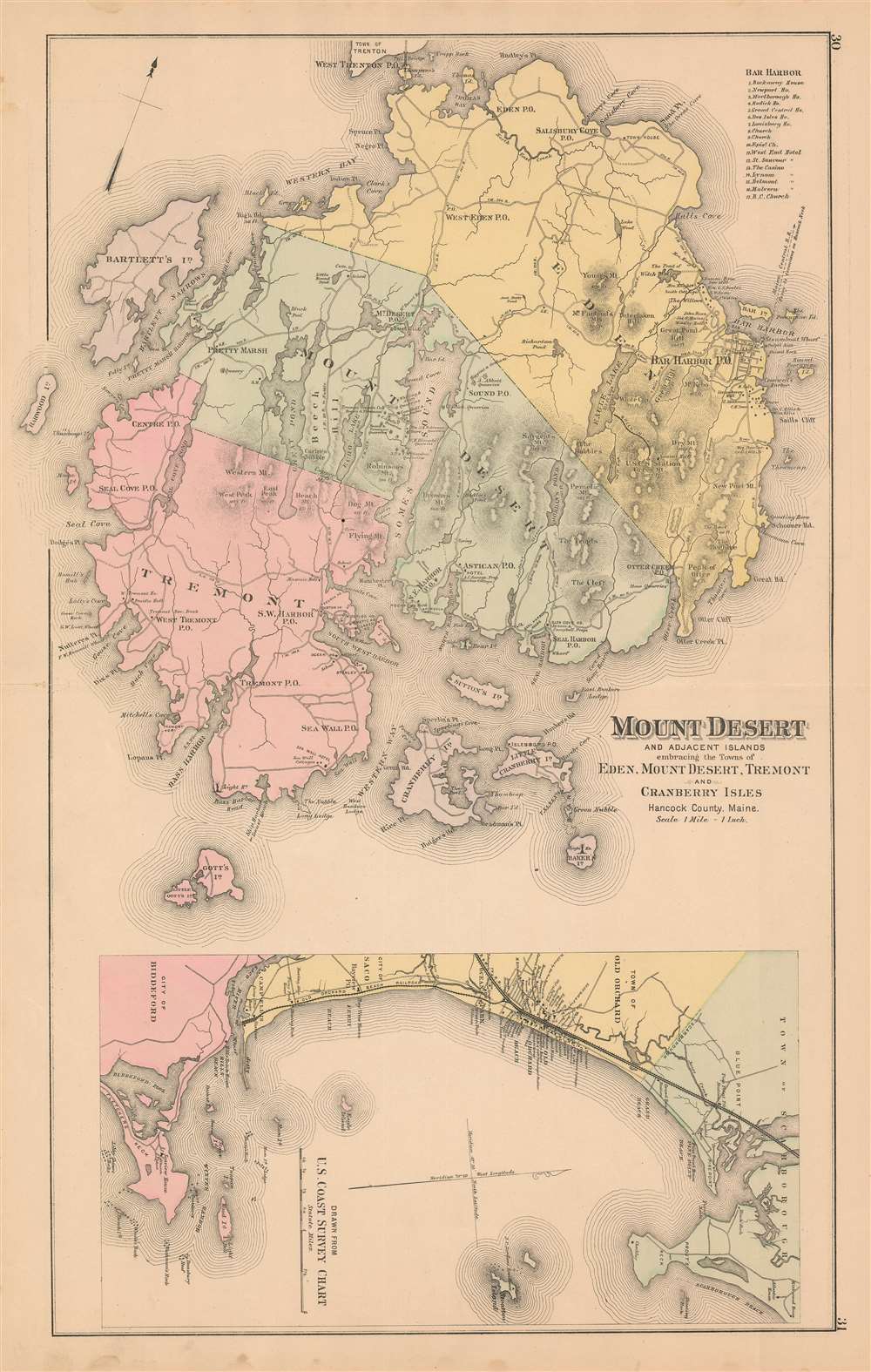 Popularized as a vacation destination during the 19th century, Mount Desert Island is renowned for its exceptional natural beauty. First brought to public attention by painters of the Hudson River School, tourists and nature lovers began flocking to the island in the 1860s. By 1880, ten years before the present map was published, the island hosted thirty hotels all vying for tourist dollars. By the 'Gay Nineties', American social elites and business magnates, including the Rockefellers, Fords, Vanderbilts, and Carnegies, built summer homes on the islands' most desirable land. Eventually the Rockefellers acquired most of the island, donating it to the Federal government as a public recreation area, Acadia National Park.

Acadia was initially established as Sieur de Monts National Monument by President Woodrow Wilson in July 1916. In February 1919, the area's status was officially changed from a National Monument to a National Park, making it the first National Park east of the Mississippi. With the change to a National Park came a name change to Lafayette National Park. It would not be until January 1929 that the park would be renamed Acadia. Acadia is unlike most other National Parks as its creation was encouraged by numerous private individuals. Most prominent among these was John. D. Rockefeller Jr. who purchased a summer home in Bass Harbor in 1910. Rockefeller aggressively purchased any land for sale, eventually acquiring most of the island. He sponsored the construction of an elaborate system of carriage roads, making generally accessible what he rightly considered 'one of the greatest views in the world.'

This map was published as plates 30 and 31 in the 1890 edition of J.N. Stuarts Stuart's Atlas of the State of Maine. The atlas was published in annual editions between 1890 and the early 1900s and is well represented institutionally. Previous editions of the atlas were published in partnership with George Colby.

George Nehemiah Colby (January 13, 1846 - 1890) was an American civil engineer and map publisher active in Houlton, Maine in the late 19th century. Colby was born in South Berwick Maine and was married to Julie Gertrude Ganong (1853 – 1889). Colby's corpus of work consists primarily of Maine focused wall maps, county and state atlases, and more specific regional maps, for which he personally compiled surveys and sold by subscription. Colby initially worked with the U.S. Coast Survey, where his work contributed to the survey's important 1881 map of Mount Desert Island, Maine. In the private market Colby published Maine centered material in the style of Massachusetts cartographer Henry Walling. That is to say, he issued highly detailed maps on a large scale that he sold by subscription to local institutions and land owners. Colby's maps, like Walling's, are exceptionally desirable for anyone interested in family history, as they often list individual family names and land holdings. Colby partnered Frederick B. Roe in 1873 to issue wall maps of several Maine towns including New Brunswick, Thomaston, Bath, and Camden. This partnership lasted until about 1878 and maintained offices in Philadelphia at 31 South 6th Street. Colby later partnered with J. N. Stuart to similarly publish subscription-based maps and atlases of Maine, Communities. When Colby retired in the 1890s, Stuart fully took over his business. Colby and his wife had three children, George Nehemiah, Frederik Franklin, and Mary Gertrude. Learn More...

Very good. Even overall toning. Light wear along original centerfold.
Looking for a high-resolution scan of this?