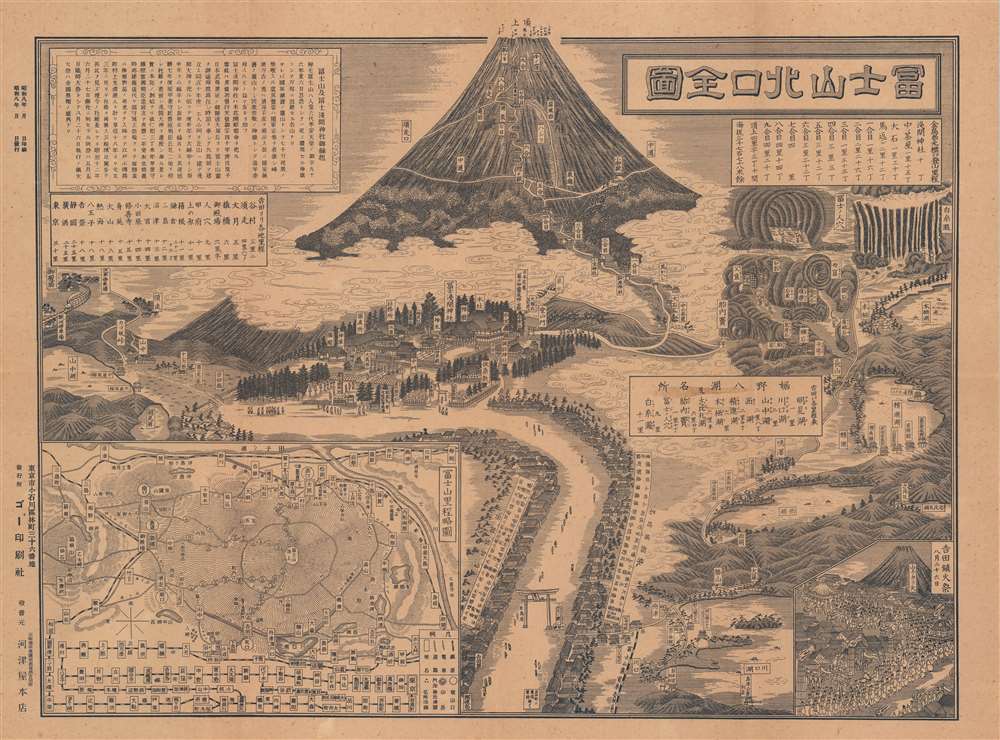 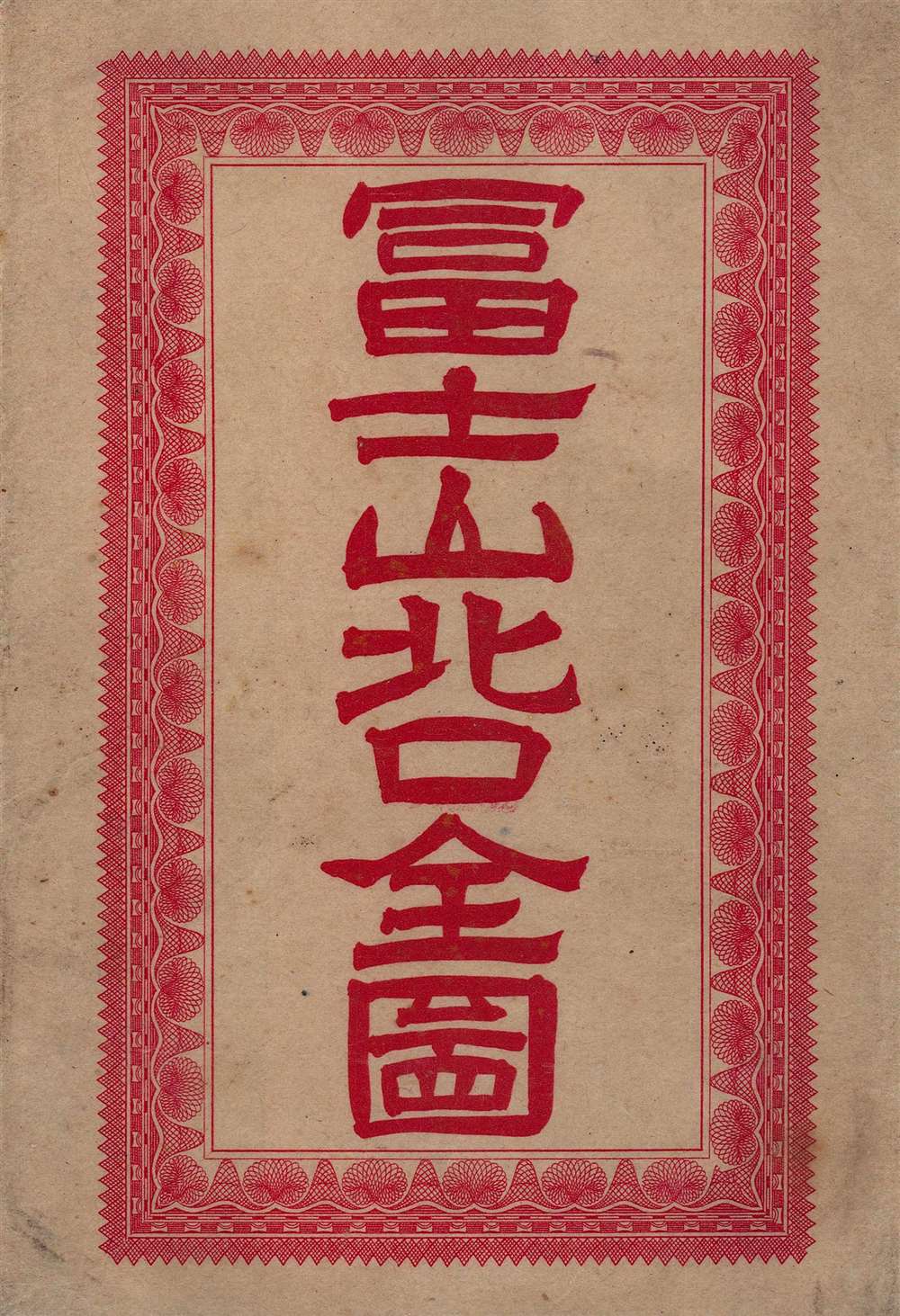 This is a rare and ingenious 1933 Showa 8 bird's-eye view map showing the northern entrance to Mt. Fuji, the highest and most culturally important mountain in Japan. The map, published by Go Printing, was intended for tourists, hikers, and pilgrims visiting Buddhist and Shinto sites. It includes a tremendous amount of information - literally anything a traveler would need to know.

The map itself shows the most popular northern entrance, starting at the town of Yoshida (吉田), going through the Asama Sengen Shrine (富士山淺間神社, also known as Kitaguchi Hongū Fuji Sengen Jinja), then to the trail leading to the summit. The train station at bottom-center is Mt. Fuji Station (富士駅) in Yoshida, the end of an electric tram (Fuji Electric Railway, 富士山麓電気鉄道) connecting Yoshida with the main rail line (today the Chūō Main Line) by way of Ōtsuki (大明). After disembarking in Yoshida, visitors could take a horse carriage (馬車) right to the gates of the Asama Shrine if they wished. Just outside the train station is the Kanadorii Bronze Gate (金鳥居), a telegraph and telephone office, and a row of ryokan (旅舘) guesthouses for travelers, the names of which are listed above the buildings.

The map has six insets. At bottom-left is a sketch map oriented to the south. It shows major entrances to the mountains and trails to the summit, noting rest stations, nearby towns and attractions, and road and rail routes. The inset at bottom-right is a depiction of the Yoshida Fire Festival (火祭), a famous event with ancient roots that takes place each year on August 26. The inset at center-right notes the distance from Yoshida to each of the five lakes of Mt. Fuji and three other popular sites (Tainai Cave, Fuji Cave, and Shiraito Falls), while the inset at top-right measures the distance from the Kanadorii Bronze Gate to points along the trail. Finally, the large inset at top-left discusses the connection between the imperial family, the Asama Shrine, and Mt. Fuji, while the smaller inset just below lists the distance from Yoshida to nearby towns and cities.

Mt. Fuji has for centuries been a significant cultural and religious site due to its height, beauty, and the presence of important kami, or Shinto spirits. Poets, pilgrims, mystics, ascetics, samurai, and others have long sought meaning and wisdom at Mt. Fuji, and the mountain has become synonymous with Japan. The cultural importance of the mountain was heightened during the Edo period because of its proximity to the capital and the Tokaido, the frequently-traveled main road connecting Edo with the rest of Japan. After Tokyo was made the imperial capital in the Meiji Restoration and the city grew tremendously, nearby Mt. Fuji became even more important to Japanese identity and was associated with the imperial family. The Meiji Restoration had also brought the initiation of State Shinto, with intense emperor worship and bureaucratic control replacing the variegated, localized landscape of Japanese folk religion that had combined elements of Buddhism and Shinto. The large inset at top-left aims to inform on the purported links between the mountain, the shrine, and the imperial family dating back to Emperor Kōan (孝安天皇). This map dates from the early Showa Era, when the already-amplified importance of the emperor and Mt. Fuji in nationalistic propaganda increased even further.

This map was published by Go Printing Co. (ゴー印刷社), a Tokyo-based publisher, and was sold by Kawazuya (河津屋本店), a local publisher and print shop in Yoshida. The National Diet Library has an edition from 1923 Taisho 12, also with Kawazuya listed as the seller (發賣元), the author listed as Kaneko Hyakutaro (金子百太郎), and the publisher listed as Kinseidō (金清堂), a Tokyo publisher. NDL also holds editions from 1923 Taisho 12 and 1925 Taisho 14 with different authors and publishers listed and slightly different insets, as well as an undated edition that has Kawazuya listed as a seller. Scarce on the market.