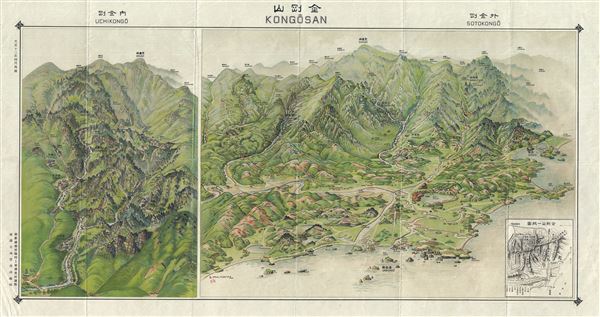 This is a rare 1923 or Taisho 12 view of Diamond Mountain or Mt. Kumgang or Kongo-San (Geumgangsan, Geumgang), in Korea or Corea. Kongo-San literally translates to 'Luminous Region.' Located in North Korea's 'Kumgangsan Tourist Region,' this mountain was formerly part of 'Kangwon-do' (North Korea) Province.

Since antiquity it has been a popular resort region known for its striking beauty, rich forests, and dramatic rock formations and is the subject of many different works of art. It has many different names for each season; In the spring it is Kumgang (Hangeul, Hanja), in the summer it is called Pongraesan (the place where a Spirit dwells); in autumn, Phungaksan (hill of colored leaves, or great mountain of colored leaves); in winter, Kaegolsan (stone bone mountain). It is most widely known as Kumgangsan. A rare find. This view was issued by the Japanese in 1923. Text is in Japanese and English.