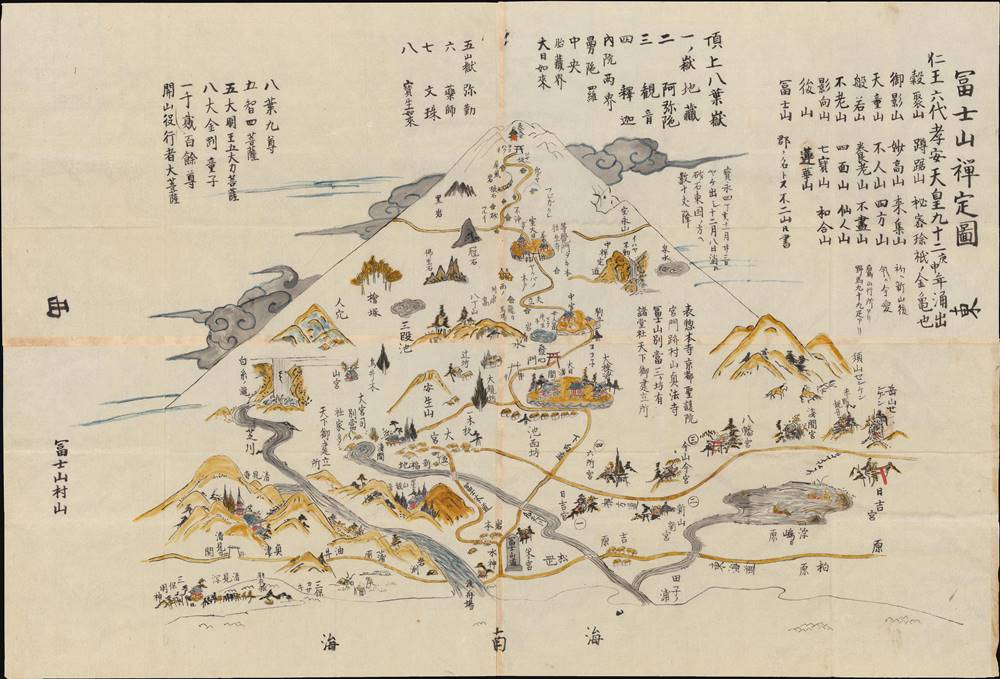 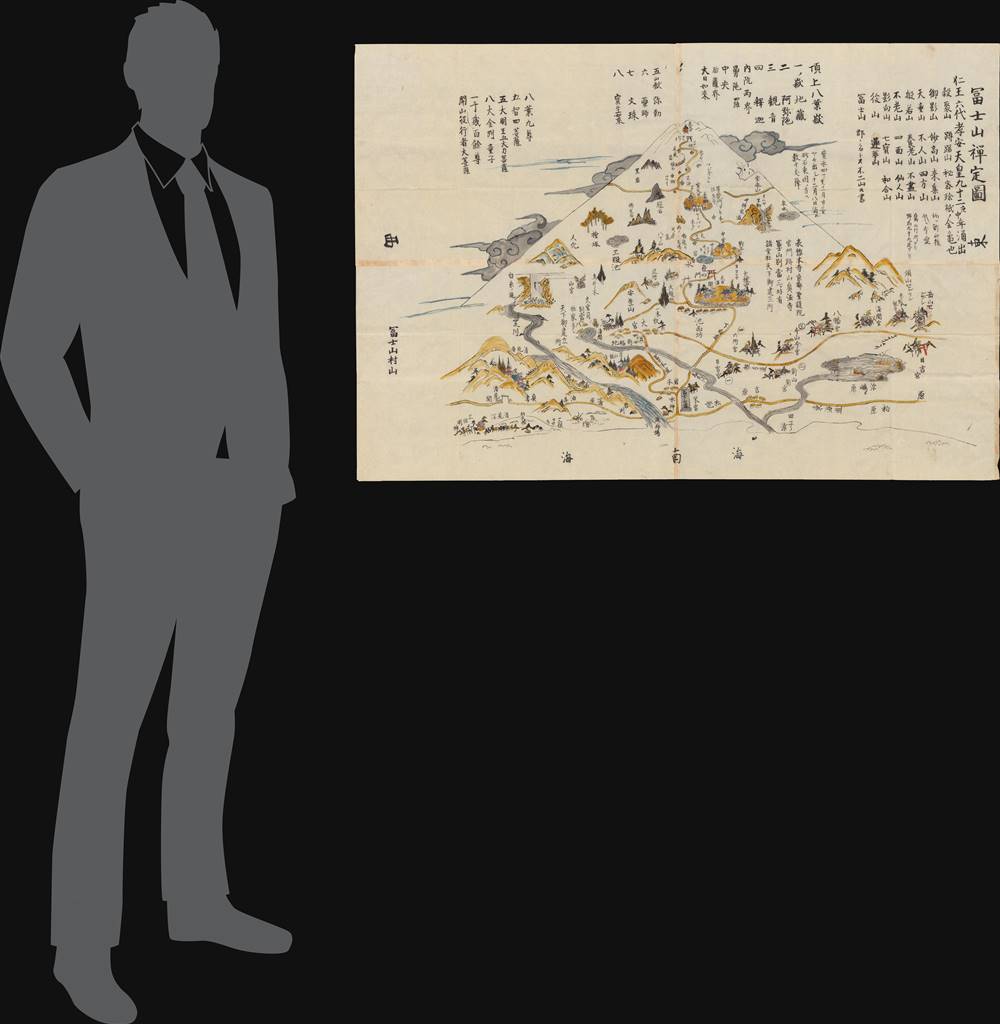 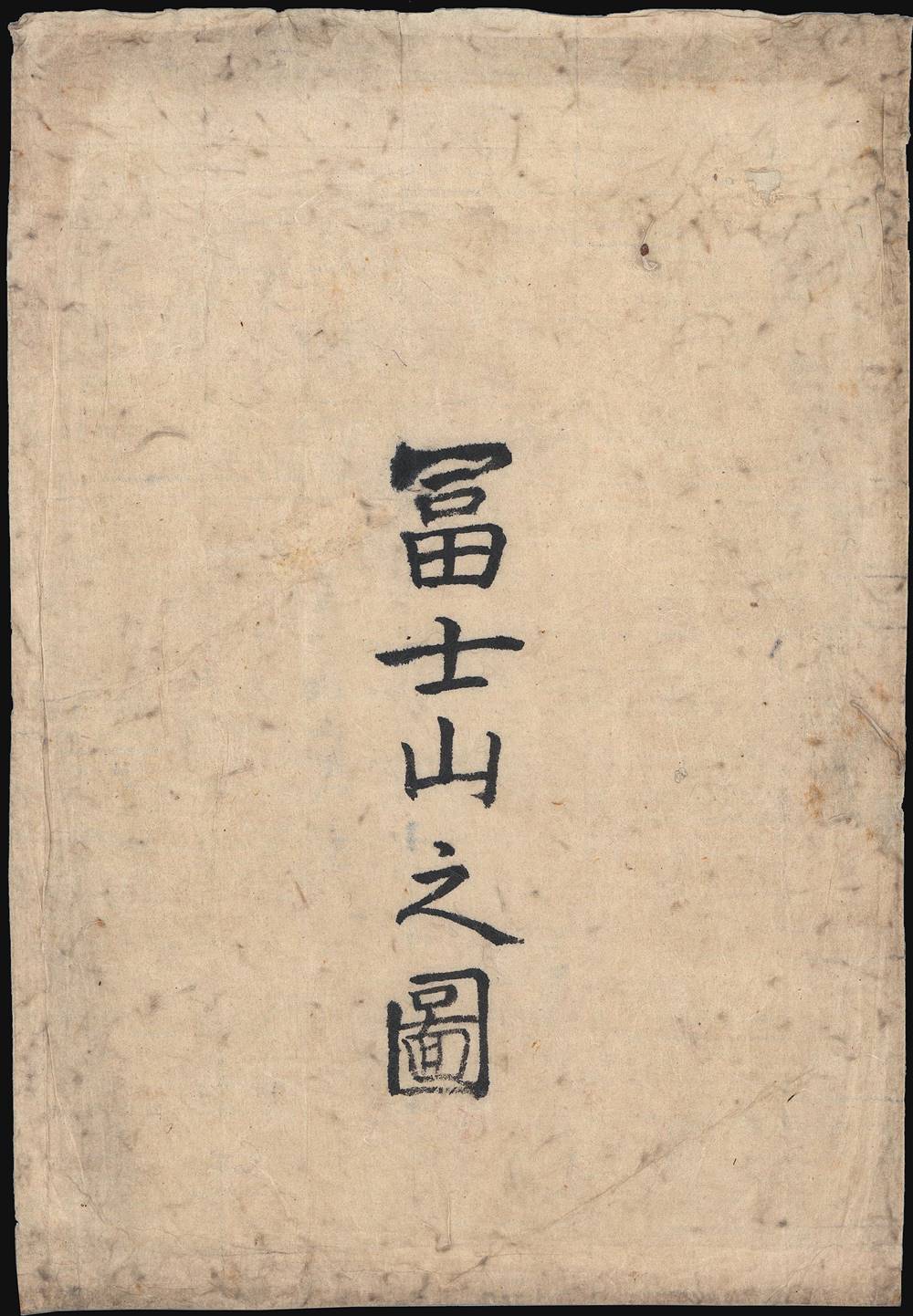 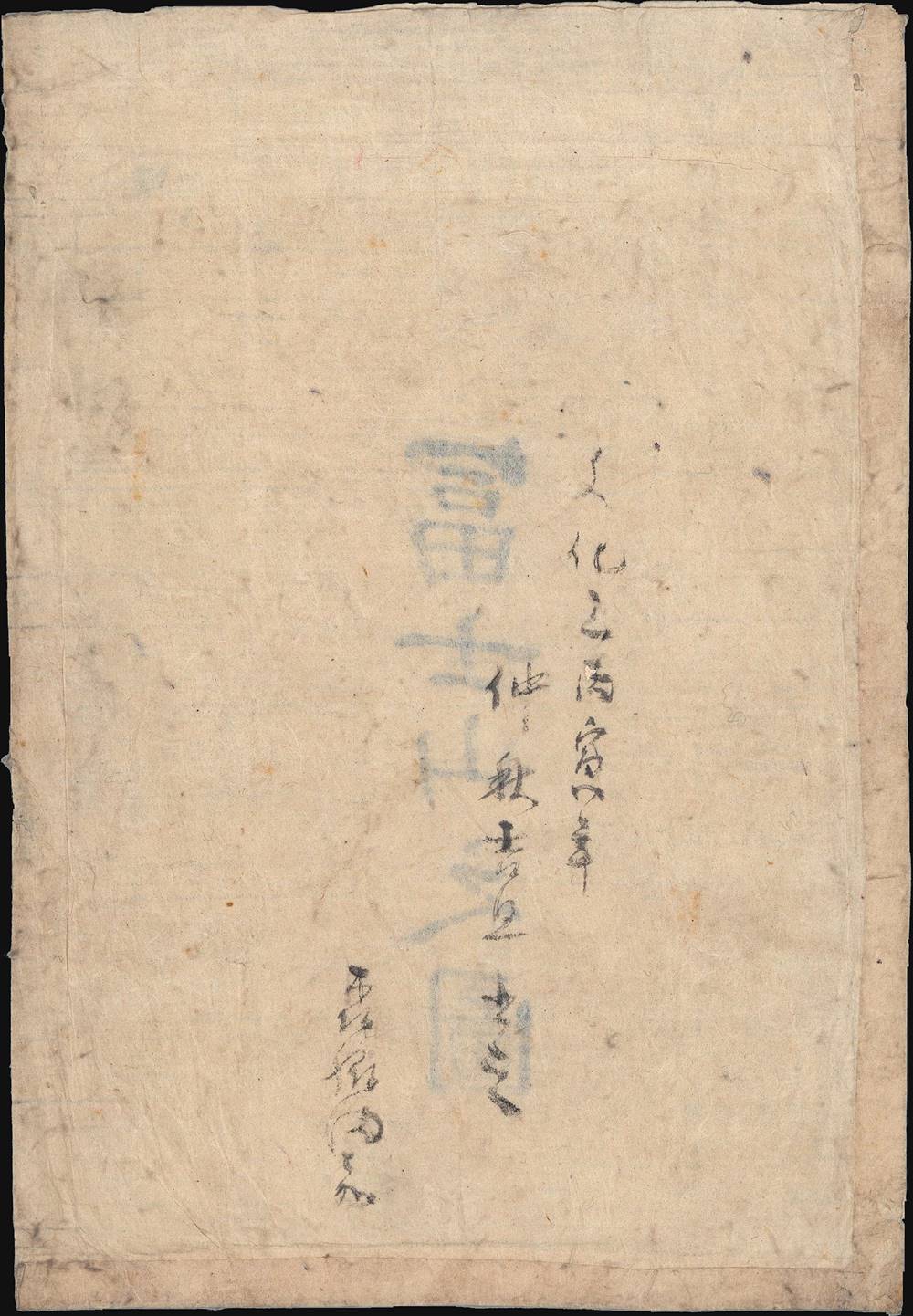 This is an extremely rare 1806 folding view of Mt. Fuji, Japan made by the Murayama Sengen Shrine (村山浅間神社) for religious pilgrims seeking to ascend the mountain and worship various kami residing there.

The main purpose of this view is to act as a trail guide for worshippers seeking to ascent Mt. Fuji along one of several routes originating from the stone marked Mt. Fuji Path (富士山道) at bottom-center. The location and name of various shrines, caves, trails, lakes, and other features on the mountain are indicated, sometimes with brief notes.

At top-right is a list of famous mountains in Japan, including Mt. Fuji. At top-center are the names of the eight peaks of Mt. Fuji around the crater formed by the dormant volcano. These peaks and other features, especially near the summit, are associated with Buddhist figures (manifestations of the Buddha and bodhisattvas).

Mt. Fuji has for centuries been a significant cultural and religious site, to the extent that it has become synonymous with Japan. Poets, pilgrims, mystics, ascetics, samurai, and others have long sought meaning and wisdom at Mt. Fuji. The cultural importance of the mountain was heightened during the Edo period because of its proximity to the capital and the Tokaido, the frequently-traveled main road connecting Edo with the rest of Japan. After Tokyo was made the imperial capital in the Meiji Restoration and the city grew tremendously, nearby Mt. Fuji became even more important to Japanese identity and was associated with the imperial family. The Meiji Restoration also brought the initiation of State Shinto, with intense emperor worship and bureaucratic control replacing the variegated, localized landscape of Japanese folk religion that had combined elements of Buddhism and Shinto.

The map is attributed to Murayama of Mt. Fuji (富士山村山), perhaps the surname of a woodblock printer, but more likely a reference to the Murayama Sengen Shrine (村山浅間神社) one of several sengen shrines located on or near the mountain. The back cover dates the map to 1806 (the third year of the Bunka era). This edition is not known by us to exist in any institution's holdings or have any history on the market. Slightly different editions are held by the University of Tokyo and the Mt. Fuji World Heritage Centre in Shizuoka Prefecture. The same institutions also hold a similar map (titled 三國第一富士山禪定圖) also attributed to Murayama of Mt. Fuji, that is either a predecessor or successor to this map.

Murayama Sengen Shrine (村山浅間神社; c. 701 - present), or Murayama Asama Shrine, is an important shrine dedicated to the kami of Mt. Fuji. It claims to date back to the early 8th century and many additional structures have been built or rebuilt over the centuries. The shrine was originally central to Shugendō (修験道) a proto-religion based on asceticism and mountain worship that developed in the Heian Period and later merged with Shinto and Buddhism. The shrine complex also sits on pilgrimage trails, which it oversees, leading up the mountain to various sites for worshipping kami. It was made a UNESCO World Heritage Site in 2013. Learn More...