1850 Mitchell Comparative Chart of the World's Mountains and Rivers 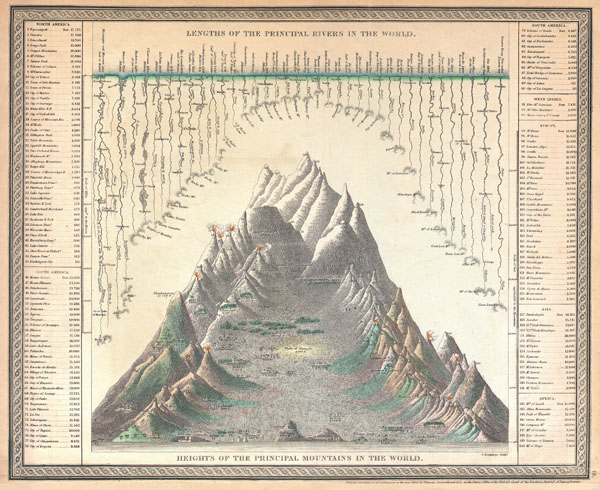 1850 Mitchell Comparative Chart of the World's Mountains and Rivers

A good example of the S. A. Mitchell Sr. / Cowperthwait map of the principal mountains and rivers of the world. Mountains are shown along the bottom of the map with important cities and geological formations noted at their appropriate elevations. Rivers are arrayed along the top of the map descending from the seas to their sources – where known. The Missouri and Mississippi River systems, at 4100 miles, are listed as the world's greatest rivers and Dhaulagiri, at 26, 262 ft., the world's tallest mountain. The mythical 'Mountains of the Moon' are noted as the source of the Nile. Engraved by F. Humphrys for issue as page 75 in the 1850 edition of Mitchell's New Universal Atlas.

A New Universal Atlas Containing Maps of the various Empires, Kingdoms, States and Republics Of The World. (1850 - 1853 issue)

Good condition. Some age toning and fading throughout. Blank on verso.