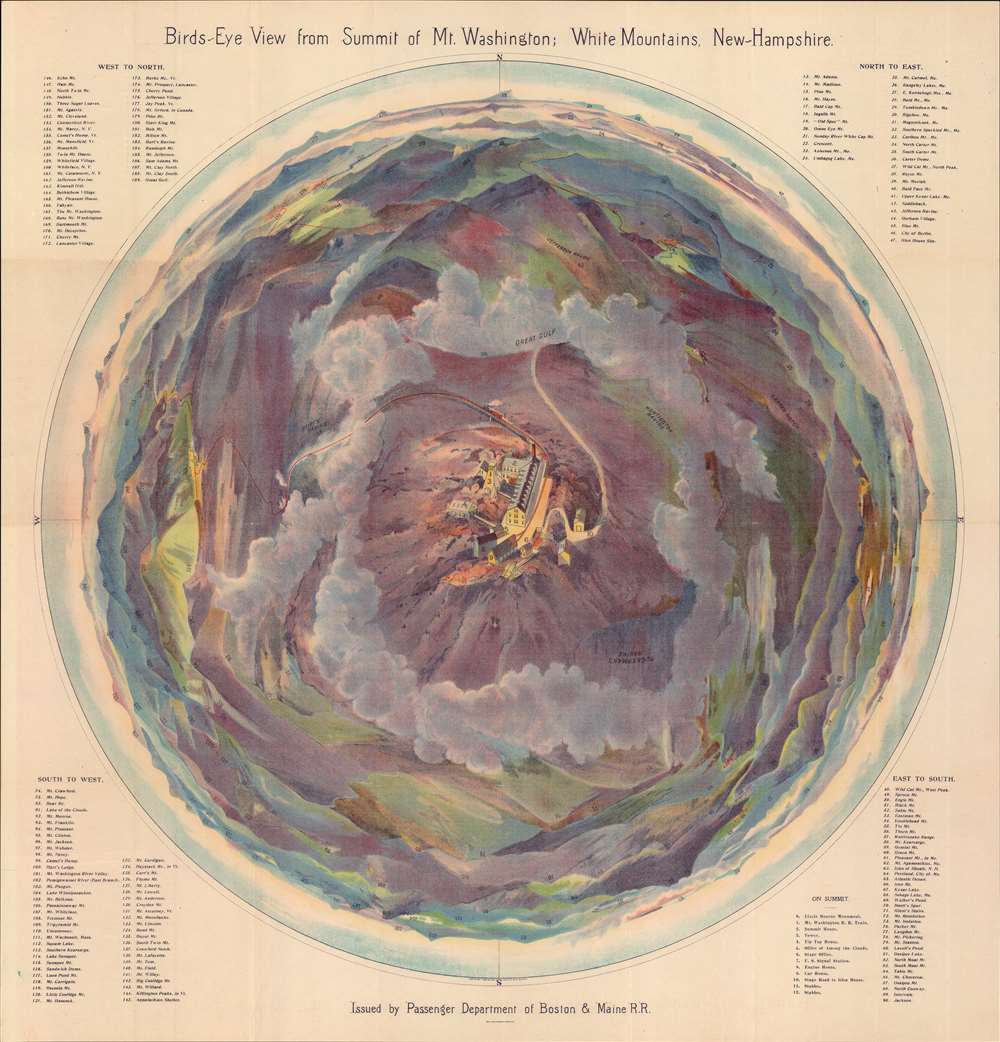 A dramatic 1902 top-down George H. Walker chromolithograph bird's-eye view of Mt. Washington and the White Mountains of New Hampshire. View maps of this style became popular in Europe in the second half of the 19th century, but his is the first such we are aware of to highlight an American mountain. The clever view can be rotated with the uppermost portion always being right-side up. Landmarks, including Lake Winnepesaukee, Sunday River, Sebago Lake, Portland, and the Isle of Shoals to name just a few of the 189 places noted.

In the heart of New Hampshire's White Mountains, Mt. Washington is the highest mountain in the northeastern United States. With the Naturalism movement in the second half of the 19th century, the White Mountains in general and Mt. Washington specifically became a hotbed of tourism. On Mt. Washington several luxurious hotels opened, including Summit House (#2, 1852), a 64-foot-long (20 m) stone hotel anchored by four heavy chains, and Tip-Top House (#4, 1853). An observation tower (#3) was also built. Both a stage road (#6, 10) and the Mount Washington Cog Railway (#1, 1869) were constructed to facilitate travel - both remain in use today. Mount Washington even had its own newspaper, Among the Clouds, (#5) published each summer from 1885 to 1917 by Henry M. Burt.

Chromolithography, sometimes called oleography, is a color lithographic technique developed in the mid-19th century. The process involved using multiple lithographic stones, one for each color, to yield a rich composite effect. Oftentimes, the process would start with a black basecoat upon which subsequent colors were layered. Some chromolithographs used 30 or more separate lithographic stones to achieve the desired product. Chromolithograph color could also be effectively blended for even more dramatic results. The process became extremely popular in the late 19th and early 20th centuries, when it emerged as the dominant method of color printing. The vivid color chromolithography produced made it exceptionally effective for advertising and propaganda imagery.

This view was drawn in 1902 and published in chromolithograph by George H. Walker of Boston for the Passenger Department of the Boston and Maine Railroad. The map is well represented institutionally, but is scarce to the market.