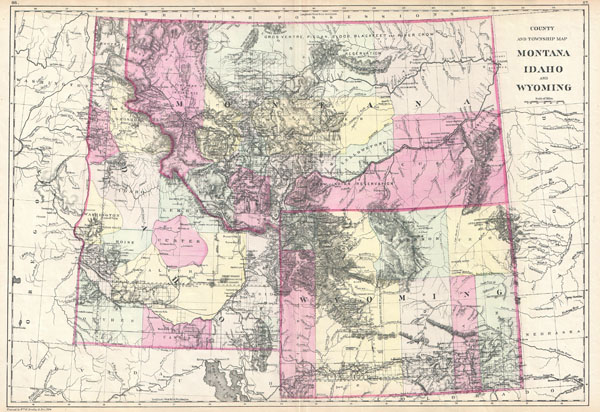 This is the rare 1884 Bradley / Mitchell map of Montana, Idaho, and Wyoming. Covers the territories of Montana, Wyoming, and Idaho in considerable detail with color coding according to counties. Shows American Indian lands, geological formations, forts, cities, maintain passes and river ways. Also notes the progress of the U.S. Land Survey in this region in the form of grids in the surveyed portions of each territory. Includes Yellowstone National Park which was created in 1871. Published by William M. Bradley for inclusion as plates no. 86 and 87 in the 1884 edition of S. A. Mitchell's New General Atlas.

William M. Bradley (fl. 1880 - 1900) was a late 19th century map publisher. The Bradley family were active cartographic publishers whose imprint appears on a number of maps, geographies and atlases. The Bradley firm is best known for its publishing of S. A. Mitchell's important New General Atlas from 1880 - 1887. Learn More...

Mitchell Jr., S. A., Mitchell's new general atlas, containing maps of the various countries of the World, plans of cities, etc. Embraced in ninety-three quarto maps. Forming a series of one hundred and forty-seven maps and plans., 1884 edition.