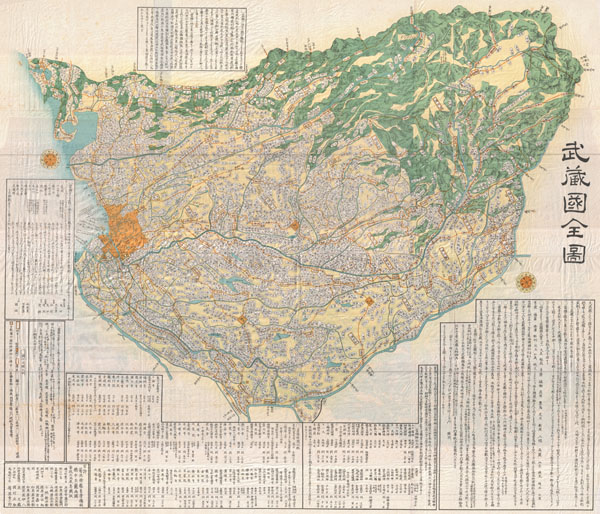 A breathtaking large format Edo Period Japanese woodblock map of Musashi Kuni dating to 1858. Musashi (???, Musashi no kuni?) was a province of Japan, which today comprises Tokyo Prefecture, most of Saitama Prefecture and part of Kanagawa Prefecture, mainly Kawasaki and Yokohama. Musashi bordered on Kai, Kozuke, Sagami, Shimosa, and Shimotsuke Provinces. Musashi was the largest province in the Kanto region. It had its ancient capital in modern Fuchu, Tokyo and its provincial temple in what is now Kokubunji, Tokyo. By the Sengoku period, the main city was Edo, which became the dominant city of eastern Japan. Edo Castle was the headquarters of Tokugawa Ieyasu before the Battle of Sekigahara and became the dominant city of Japan during the Edo period, being renamed Tokyo during the Meiji Restoration. Printed in the traditional Japanese style popular during the Edo Period, with topograpy shown in profile, no firm directional orientation, and map titles in cartouches. A rare opportunity to own an extraordinary item.

Very good. Minor wear on original fold lines.
Looking for a high-resolution scan of this?