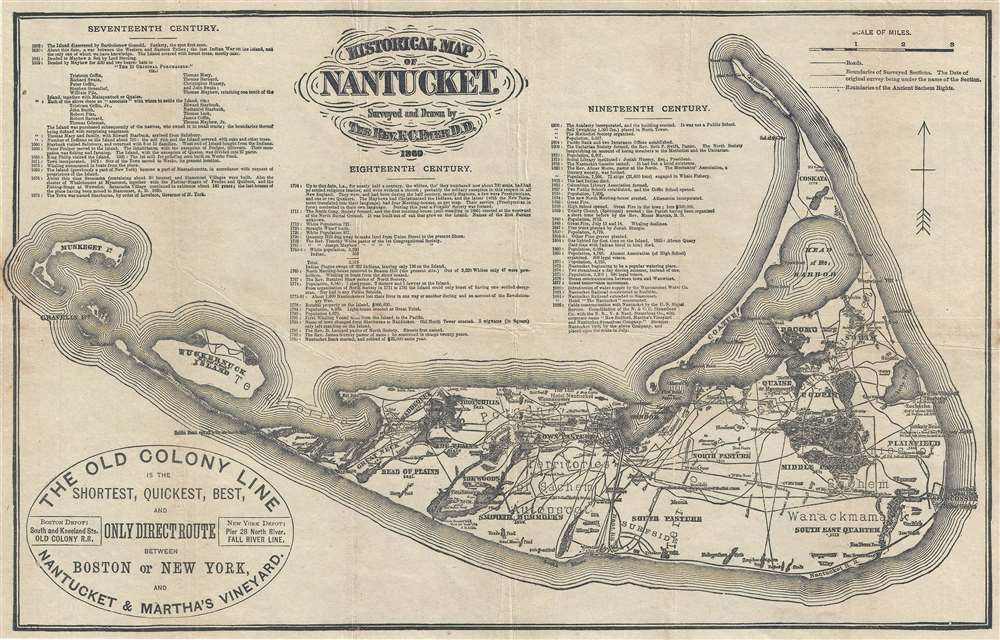 This attractive 1889 map is a reduced version of Reverend F. C. Ewers important 1869 map of Nantucket. Printed in Nantucket, this variant was issued by the Old Colony Rail Line in various formats from roughly 1872 to 1889. Covers the island of Nantucket in superb detail focusing on transportation and communities. Advertises the 'Old Colony Line' as the 'Shortest, Quickest, Best, and Only Direct Route between Boston or New York and Nantucket and Martha's Vineyard.' Also notes Native American claims to the Island. Features three columns of text breaking down the history of Nantucket from its discovery by Bartholomew Gosnold in 1602 to the laying of the first communications cables between Nantucket and the mainland in 1886.

Nantucket in a Nutshell

This map is probably the edition prepared and published by the 'Inquirer and Mirror Steam Press' of Nantucket for inclusion in their appealing 1889 pocket guide to the island entitled Nantucket in a Nutshell. The rare guidebook, by Roland B Hussey, which is not included in this offering, consisted of 36 pages detailing the history, inhabitants, government, religion and trade of the island. It also extoled the virtues of Nantucket as a sanitarium, sporting ground, and holiday destination.

Hussey, R. B. Nantucket in a Nutshell, (Nantucket: Inquirer and Mirror Press) 1880.