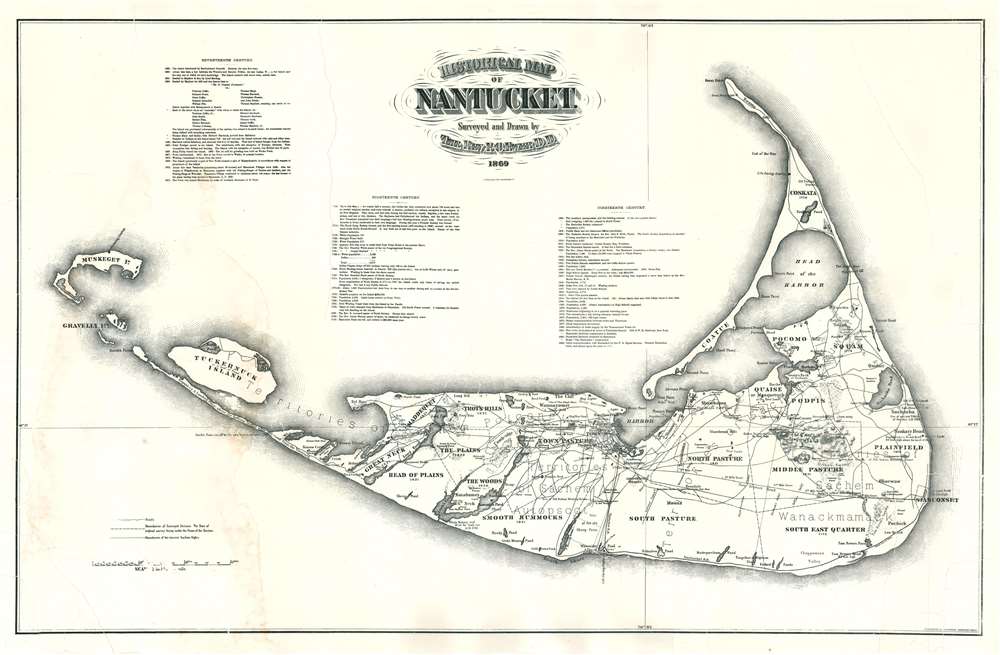 'The largest, best-known and most useful Nantucket map.' -Crosby

An impressive c. 1886 large scale wall map of Nantucket, Massachusetts. This map is a later, much-enlarged Joseph B. Swain issue of Reverend Ferdinand Cartwright Ewer's (1826 - 1883), seminal 1869 map of Nantucket. It was likely made to promote the Nantucket Hotel, which opened 2 years earlier. According to Nantucket historian, Everett U. Crosby, this is 'The largest, best-known and most useful Nantucket map.' The map is richly detailed and expressive of Nantucket's topography, road system, railroad lines, and even political breakdown. It shows swamps, ponds, important hotels and lighthouses, hills, and more. Some references are dated and correspond to a table located at center.

Ewer’s map provides a detailed synopsis of Nantucket’s history, beginning with Gosnold’s sighting of the island in 1602. The chronological table identifies the major stages in Nantucket’s development-its early settlement and land divisions, the evolution from shore to deep-sea whaling, the establishment of religious and educational institutions, and the development of the transportation network connecting Nantucket with the mainland (and Nantucketers with one another). Ewer also notes events that marked the transition from one era to the next-the first island whaler to seek its prey in the Pacific (1791), the death of the last Indian (1822), the great fires of 1836 and 1846, and the first gaslight in 1854. In more graphic form the map indicates the sites of old settlements and burial grounds, as well as the boundaries of sachem rights, the former shoreline, old fishing stages, and whaling stations. (Garver, G. Surveying the Shore, p. 115.)

The present map was introduced by J. B. Swain in or around 1886. It is almost certainly a promotional piece associated with the Hotel Nantucket, shown here on Brant Point. The hotel was a response to growing 'summering' interest around Nantucket and was the first major hotel on the island. We know Swain was a Nantucket hotelier in his final years, so his association with the Hotel Nantucket, while not fully verified, is almost certain. We also know that the hotel was built on 'Society of Friends' land, and that Swain was closely associated with the 'Friends' in Nantucket. In any case, Swain massively enlarged the rather modest Ewer map to an impressive 28 x 43, inches, making it the largest 19th century map of Nantucket. He further updated it to reflect recent changes on the island, including the construction of the Hotel Nantucket, the Nantucket Railroad from the harbor to Surfside and on to Siasconset, and life-saving stations at Coskata and Muskeget Island. He also notes, in 1877, the 'Great Temerance Movement.' The table of historical events has been updated to 1886 and reflects these and other developments.

Originally drawn and published by Ferdinand Cartwright Ewer in 1869. The present example was updated by Joseph B. Swain and lithographed by J. Ottmann (Puck Building) around 1886. Examples are scarce and typically in poor condition.


Joseph B. Swain (December 31, 1814 - June 17, 1888) was a Nantucket tinsmith, businessman, and insurance agent based in Nantucket, Massachusetts in the middle part of the 19th century. Swain was born and lived most of his life in Nantucket, where he had an insurance business. Later in his life, recognizing Nantucket's allure for tourists, he constructed and managed a hotel, almost certainly the Hotel Nantucket, constructed on Brant Point in 1884. Most likely, promotion of his hotel was what prompted Swain to engage in his only cartographic endeavor, the production of a large sale reissue of Ferdinand Cartwright Ewer's iconic 1869 map of Nantucket. Swain was a teetotaler and a 'birthright member of the Society of Friends.' He died after a brief illness at 73. Learn More...

Good. Map has been laid down on linen. There are several repaired and reinforced tears. Large water stain on left side visible but highly diminished.