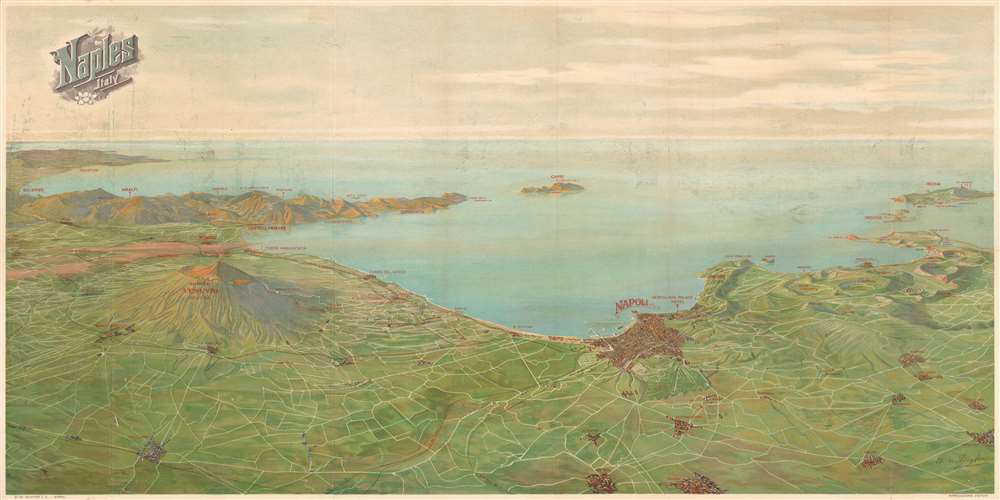 A stunning birds eye view of the Amalfi Coast and Naples, Italy.

This is a stunning c. 1920 Richter and Company bird's eye view of the majestic Amalfi Coast, Naples, and Capri, Italy and environs, here it its only known example. The view depicts the Italian Mediterranean coastline from the northeast, illustrating from Salerno to Ischia Island and as far inland as Casoria. Naples (Napoli) is situated to the right of center along the Gulf of Naples while Mount Vesuvius is on the left. Numerous cities are labeled, including Sorrento, Pompeii, Castellammare, Amalfi, and Salerno, along with smaller towns and villages. Roads and railroads connect them all. Capri and Mount Solaro are illustrated just above center.

This map was published by Richter and Company of Naples c. 1920. A printed signature appears in the lower right corner, and, since we believe it to be that of Charles von Liegler, most likely the artist who created the piece. We have been unable to locate any other examples of this view.

Richter and Company (1842 – 1930) were Neapolitan publishers of maps and travel posters most active in the latter part of the 19th and early 20th centuries. The firm was founded in 1842 by Richter, a Swiss typographer and chromolithographer who immigrated to Naples shortly before opening the firm. Following the unification of Italy, he became the official printer of the government, producing various graphic works including currency. Later, in the 1880s, they began to produce promotional material, including the occasional map, for hotels. The company received a boost when they hired Mario Borgoni as their chief artistic director. Inspired by the art nouveau movement, Borgoni began expanding the hotel printing business into various hotel labels and posters, for which they are best known today. Borgoni's iconic posters and baggage labels, drawn for the finest hotels all over the world, are today highly coveted by ephemera and poster collectors. When the New York stock market crash of 1929 devastated the European hospitality industry, Borgoni left the company and they closed their doors in 1930. Learn More...