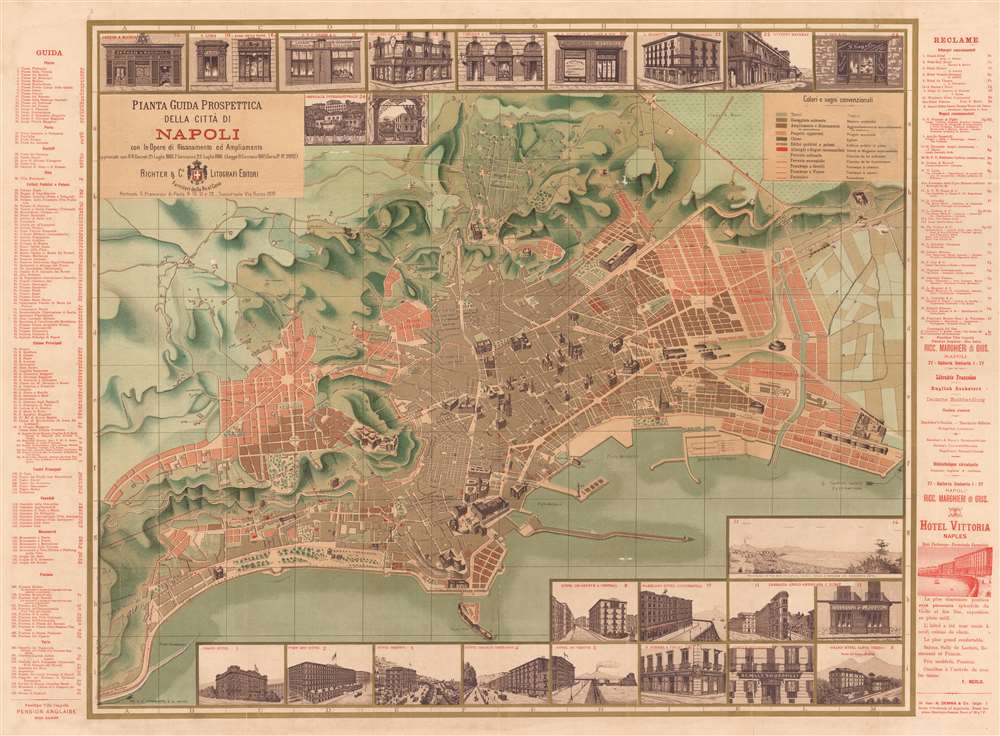 Drawn for the Grand Tour, this is a captivating 1886 Richter and Company large-scale chromolithograph pocket map of Naples (Napoli), Italy. The map depicts Naples and some of the surrounding hills. Topography is rendered with shading and important buildings and monuments and shown in profile, including the Palazzo San Giacomo, the National Museum, and the central train station. Twenty-four inset views of important buildings and businesses line the top and bottom borders, including important hotels, restaurants, and other businesses of interest to the traveler. A key, situated in the upper-right, identifies the colors and symbols used to mark theaters, churches, public buildings, palaces, and recommended hotels and shops. Railroads and tramways (both horse-drawn and steam-driven) are marked as well. A guide to the city appears outside the left border and lists plazas, castles, important streets, monuments, fountains, and more. Along the right side of the map, advertisements for various businesses, including the Hotel Vittoria, hope to attract a visitor's attention.

From the seventeenth through the nineteenth century, the Grand Tour acted as an educational rite of passage for the children of Europe's merchant elite and nobility. The Grand Tour allowed young men and women of means to study languages, art, fencing, dancing, and more while experiencing the best of Europe's most celebrated cities. The conventional itinerary started in Paris and from there 'tourists' would travel to Switzerland, enjoy extended stays in Venice and Rome, travel to Naples to visit the ruins at Pompeii, and visit other Italian cities, including Florence, Pisa, and Milan. Some might continue farther south to visit Sicily or Greece, but most returned north, where they visited as Vienna, Munich, Heidelberg, and Berlin. The Grand Tour was meant to cultivate a veneration for Classical Antiquity and the Renaissance. By the mid-nineteenth century, with the advent of Europe's railroads, the formal 'Grand Tour' began to fade away. Less expensive railroad travel made the Grand Tour attainable for Europe's middle-class. Thus the advent of mass tourism, which ended the era of the elite Grand Tour.

This map was created and published by Richter and Company in 1886. This is the only known example.

Richter and Company (1842 – 1930) were Neapolitan publishers of maps and travel posters most active in the latter part of the 19th and early 20th centuries. The firm was founded in 1842 by Richter, a Swiss typographer and chromolithographer who immigrated to Naples shortly before opening the firm. Following the unification of Italy, he became the official printer of the government, producing various graphic works including currency. Later, in the 1880s, they began to produce promotional material, including the occasional map, for hotels. The company received a boost when they hired Mario Borgoni as their chief artistic director. Inspired by the art nouveau movement, Borgoni began expanding the hotel printing business into various hotel labels and posters, for which they are best known today. Borgoni's iconic posters and baggage labels, drawn for the finest hotels all over the world, are today highly coveted by ephemera and poster collectors. When the New York stock market crash of 1929 devastated the European hospitality industry, Borgoni left the company and they closed their doors in 1930. Learn More...