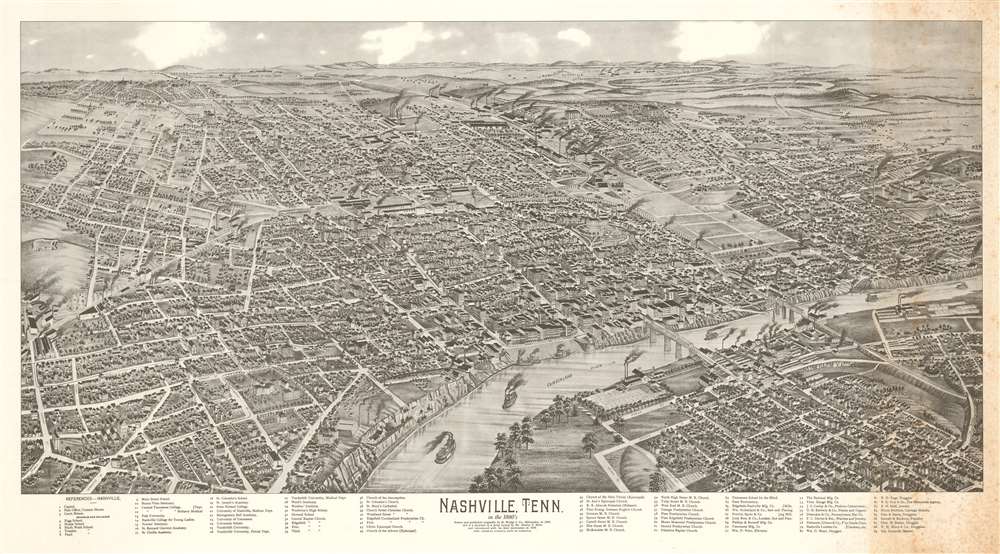 A promotional piece published by the First American National Bank of Nashville.

This is a 1958 First American National Bank of Nashville bird's-eye view map of Nashville, Tennessee, originally published by Henry Wellge in 1888. Looking west over the city from a point above the modern-day neighborhoods of Historic Edgefield and Shelby Hills, the Tennessee State Capitol is laid down among the low-profile houses and apartment buildings. Nashville's important railroads and factories are prominently illustrated, with factory smokestacks across the city emitting large plumes of black smoke - indicative of industrial prosperity. Riverboats travel up and down the Cumberland Rive.r Many streets are labeled, and eighty-nine locations throughout the city are numerically identified, including numerous businesses, churches, and schools (such as Vanderbilt University), and correspond with a reference along the bottom border.

This bird's-eye view was published by the First American National Bank of Nashville in 1958 as a promotional piece from a print owned by Stanley F. Horn. The source view was published by Henry Wellge and Company of Milwaukee in 1888. This 1858 view is not a stone-lithograph, the original Wellge piece, from 1888, would have been. Three examples of the present map are cataloged in OCLC and are part of the collections at Cornell University, the Tennessee State Library and Archives, and Brigham Young University.