1849 Meyer Map of the Duchy of Nassau, Germany 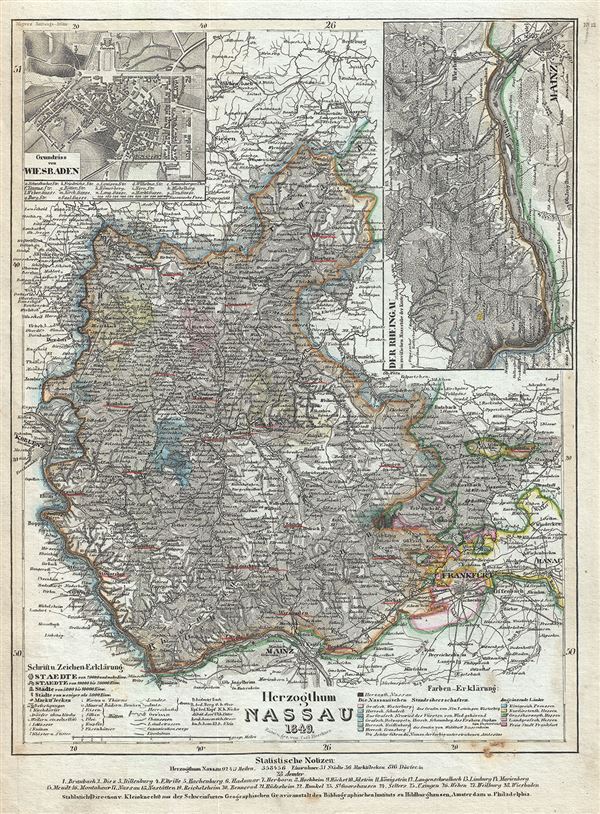 1849 Meyer Map of the Duchy of Nassau, Germany

This is an attractive 1849 map of the Duchy of Nassau by Joseph Meyer. It covers from Bad Berleburg south to Mainz and from Koblenz east as far as Hanau. An inset of the Rhine River in included in the top right quadrant while another inset detailing the capital city of Wiesbaden is included in the top left quadrant. Throughout the map identifies various cities, towns, rivers and an assortment of additional topographical details.

Incorporated in 1806, the Duchy of Nassau was a German State part of the Confederation of the Rhine. After the Napoleonic Wars, the Congress of Vienna included additional territories, following which the Duchy joined the German Confederation. It would be annexed to the Kingdom of Prussia following the Austro-Prussian War of 1866.

This map was issued as plate no. 12 in Meyer's Zeitung Atlas. Although all the maps in this atlas are not individually dated, the title page and maps were often updated while the imprint with the date was not, causing confusion to the exact date for some of the maps. Moreover some maps in the atlas were taped in at a later date as an update to the atlas. We have dated the maps in this collection to the best of our ability.

Very good. Minor toning and some foxing at places.