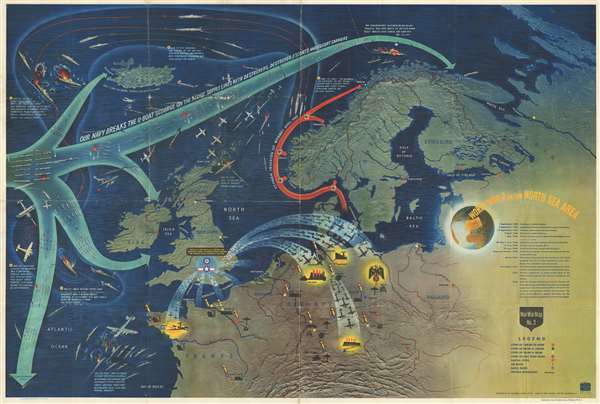 Illustrates the Battle of the Atlantic and Allied strategic bombing campaigns in northwestern Europe.

This is a 1944 Navy Department pictorial map of northwestern Europe and the North Atlantic. The map depicts the region from the Atlantic Ocean to Russia and from the Arctic Ocean to central France and Switzerland. Illustrating two crucial aspects of the war in Europe, the Battle of the Atlantic and the Allied strategic bombing campaign of targets in France and Germany, a clear portrait of the current state of the war is painted here.

Winston Churchill, the British Prime Minister during World War II, claimed that the only part of the war that ever truly frightened him was the 'U-boat peril'. As the war in continental Europe raged, Britain was fighting for its very survival in the Atlantic. Churchill believed that Germany's best hope of winning the war was through destruction of Allied shipping. Between the fall of France in June 1940 and the end of that year, German U-boats, mines, and aircraft succeeded in sinking three million tons of Allied shipping. If Britain had been cut off from the rest of the world by Hitler's 'wolfpacks', the war surely would have been lost. Through Allied persistence and commitment, along with new technology, tactics, and intelligence efforts, the effectiveness of German U-boats gradually waned. The Battle of the Atlantic was never truly 'won' by either side and it was one of the longest campaigns in the war. Between 75,000 and 85,000 Allied seamen perished while ferrying supplies across the Atlantic.

The tactic of strategic bombing was practiced by both Allied and Axis forces during World War II, and not only in Europe. Japanese forces mercilessly bombed targets in China and elsewhere during the Pacific War. By using air power to destroy enemy targets, both sides believed that this practice would damage, at least to some degree, the enemy's ability to prosecute the war or produce war materials. Raids on both military and industrial targets were organized by both sides, along with missions that specifically targeted civilian populations in an effort to terrorize them and disrupt their usual activities.

Elements of both the Battle of the Atlantic and the Allied strategic bombing campaigns are illustrated here. Large, light blue arrows spread across the Atlantic, allowing the viewer to better grasp how far Allied convoys traveled, particularly as they broke 'the U-boat scourge on the Allies' supply lines'. Five numbered captions trace one of the most talked about events of the Battle of the Atlantic, the sinking of the Bismarck. The Bismarck, and her sister ship the Tirpitz, were the largest battleships in the German navy, and, consequently, the largest battleships built in Europe. If she had been able to safely reach the Atlantic, the destruction wrought upon Allied convoys would have been disastrous. However, through friendly forces in the Swedish Navy, British military officials were alerted that the Bismarck was heading for the Atlantic, a fact which was supported by radio intercepts from Bletchly Park. After a series of engagements across the north Atlantic, the Bismarck succumbed to British torpedoes.

As for the Allied strategic bombing campaign, R.A.F. and U.S.A.A.F. forces are illustrated bombing targets in the French cities of Brest, Lorient, Rouen, Le Havre, and Paris, along with German targets in the industry-rich region of the Ruhr Valley, Hamburg, and Berlin itself, labeled with a Nazi eagle holding a blood-red swastika. It is important to remember that this map, and the others in the NavWarMap series, were created both to inform, but also to motivate, Allied soldier, sailors, and airmen.

NavWarMap No. 1 The Mediterranean is part of a series of six maps that was created by the Bureau of Naval Personnel, which was part of the Navy Department. These include:These maps were then distributed by the Educational Services Section of the Bureau of Naval Personnel. It is unclear exactly what the duties of the Educational Services Section entailed, but we believe that these maps were created to help educate and train naval and marine corps personnel, as the Navy believed that created more effective sailors and marines. These maps were printed in both single- and double-sided versions. We have been unable to ascertain why both versions were printed.

This map was created within the Bureau of Naval Personnel, most likely by the training division, and distributed by the Educational Services Section. It is important to note that NavWarMap No. 4 The North Pacific Area is printed on the verso.