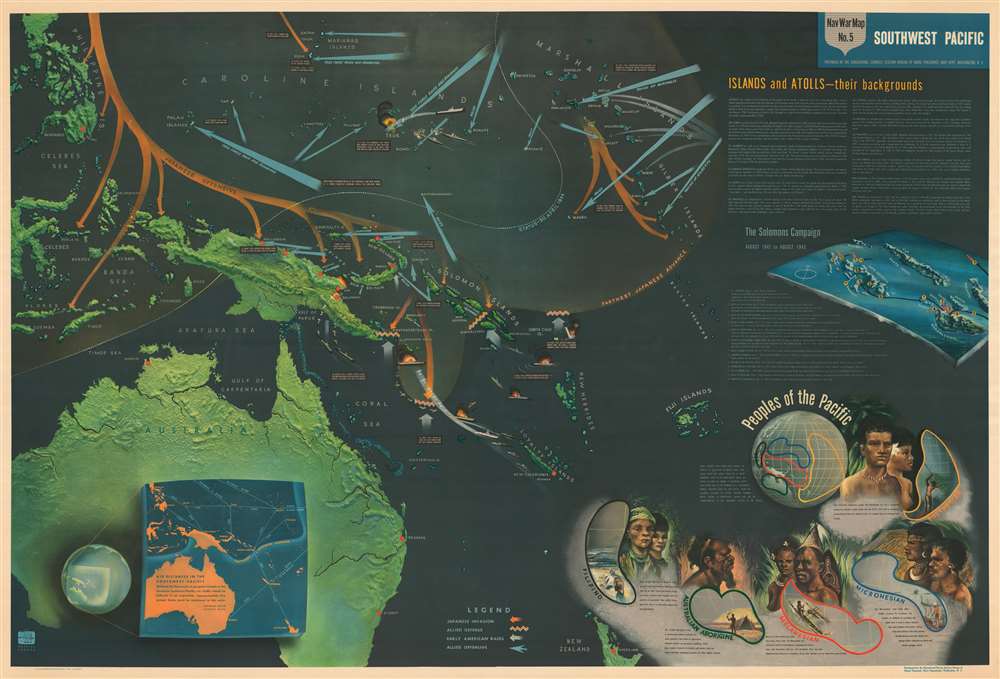 This is a 1944 Navy Education Services pictorial wall map of the Southwest Pacific which, unlike many other examples of this map, has never been folded. A critical theater in the Pacific War, the map depicts the region from Celebes in Indonesia to the Marshall and Gilbert Islands and from the Philippines and the Marianas Islands to New Zealand.

Understanding the Map Itself

The central map follows events in the Pacific War that take place over a period of more than two years. The orange arrows follow the Imperial Japanese offensive south that began in December 1941 – January 1942 through the Philippines, Indonesia, and New Guinea to the Solomon Islands and Guadalcanal, where the United States undertakes their first offensive of the war. While the invasion of Guadalcanal is not marked by a specific date and text box, a large blue arrow marks the American landing and the crooked yellow line marks the staunch Allied defense of the island that lasted for months. Other blue arrows indicate areas of successive Allied raids and landings. Some of these, such as raids against Truk and Guam and the landings on Tarawa and in the Marshalls, are supplemented with small text boxes. An area of light orange illustrates the furthest reach of the Japanese advance in the South Pacific, while a white dotted line helps viewers visualize the progress the Allies had made form the beginning of the war until the end of April 1944. An inset in the lower left corner provides some context as well, informing viewers that 'approximately five United States could be contained' in the area depicted on the map.

Aside from the central map that focuses on the geography of the events of the Pacific War in the Southwest Pacific, the map's creators included amazing supplementary educational content about the area. Short descriptions of twelve different islands and atolls are situated below the title and provide the viewer with short summaries of each one's 'history of discovery', climate, and appearance, including New Guinea, the Gilbert Islands, and the Marshall Islands, which had already been taken, or were actively being fought over, when this map was published. Others, such as the Marianas and the Philippines, would become battlegrounds before 1944 was over. Below these summaries sits a chronological history of the Solomons Campaign, which everyone looking at this piece in 1944 would have been at least slightly familiar with due to the campaign's importance. Thirteen different actions, both naval battles and land assaults, are recounted, with each one numerically identified on the corresponding map. Then, in the lower right quadrant, pseudo-ethnographic sketches of the 'peoples of the Pacific' are included. These are present likely to prepare service members for their inevitable encounters with them, and perhaps even to help them understand that not all the peoples of the region are the same. Also, it is important to remember that this map, and the others in the NavWarMap series, were created both to inform, but also to motivate, Allied soldiers, sailors, and airmen.

NavWarMap No. 5 Southwest Pacific is part of a series of six maps that was created by the Bureau of Naval Personnel, which was part of the Navy Department. These include:These maps were then distributed by the Educational Services Section of the Bureau of Naval Personnel. It is unclear exactly what the duties of the Educational Services Section entailed, but we believe that these maps were created to help educate and train naval and marine corps personnel, as the Navy believed that created more effective sailors and marines. These maps were printed in both single- and double-sided versions. We have been unable to ascertain why both versions were printed.

This map was created within the Bureau of Naval Personnel, most likely by the training division, and distributed by the Educational Services Section. Usually, when we encounter examples of maps from this series, they have been folded. Here, surprisingly, this example has never been folded, giving it a pristine appearance that most from this series do not have. No OCLC references exist for the individual maps. One OCLC entry catalogues nine institutions that possess the entire set of six in their collection, which are: Franklin and Marshall College, the Ohio State University, the University of Michigan, the University of Wisconsin, the Wisconsin Historical Society, the University of Florida, Idaho State University, the National Library of Australia, and Monash University in Clayton, Australia.