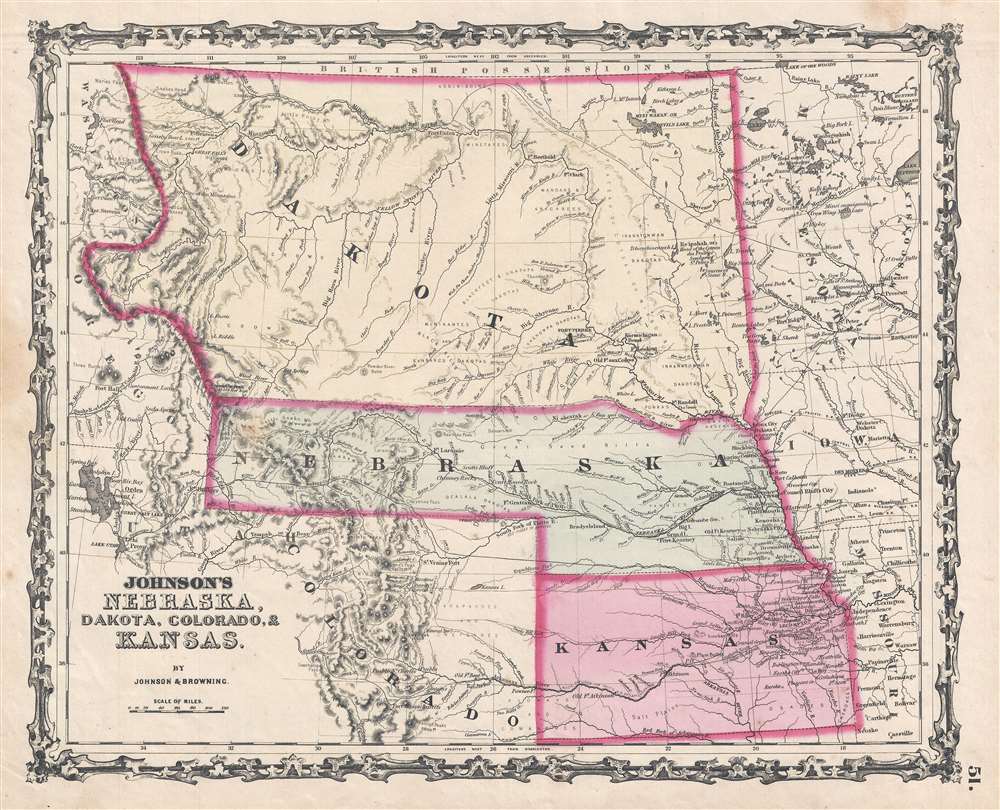 From the 1862 Johnson and Ward edition of the Atlas, this is one of the rarest and most desirable states of Johnson's Dakota, Nebraska and Kansas map. In this example, Nebraska is drawn with a long panhandle, with the state extending from Iowa all the way to Fremont's Peak. To the north, Dakota is a massive and newly partitioned territory extending from Minnesota to the Rocky Mountains and from Nebraska to the border with British Columbia. An embryonic Colorado is illustrated, with a few towns and North Park, Middle Park and South Park noted. The three proposed routes for the Pacific Railroad are also noted: the Governor Stevens route through Dakota, the Lieutenant Beswith route through Nebraska, and the Captain Gunnison route through Colorado and Kansas . Various American Indian Nations are referenced throughout, as well as countless geographical features including mountains, lakes, passes, rivers, rapids, etc. The whole is surrounded by the strapwork style border common to Johnson's atlas work from 1860 to 1863.

Johnson, A. J., Johnson's New Illustrated (Steel Plate) Family Atlas with Descriptions, Geographical, Statistical, and Historical. (1862 A. J. Johnson & Ward edition)     Johnson's New Illustrated Family Atlas was produced in numerous editions from about 1860 to 1887. Johnson's first atlas was mostly likely the 1859 edition of Colton's General Atlas which both aesthetically and comprehensively very similar to the 1860 first edition of the New Illustrated Family Atlas. Johnson's atlas was noteworthy in its day as one of the few commercially produced American atlases that could compete with more established European Atlases. Although he called the atlas 'Steel Plate' on the title page for marketing purposes, Johnson in fact incorporated modern lithographic printing techniques and lower quality woven wood pulp paper to economically produce large format maps in quantity. He also began publishing the New Illustrated Family Atlas on the cusp of the American Civil War, a decision that proved fortuitous, as the war corresponded to a general increased interested in cartography. For the most part, Johnson's Atlas was sold by subscription; nonetheless it became so popular that for at time he was considered the largest publisher in the world. Other than the first edition, the atlas itself has no true editions. Rather, Johnson incorporated updated maps as they became available, so each example of the Johnson atlas might well contain unexpected and scarce individual maps. Johnson's map of the American Southwest, for example, appeared in more than 17 different states, each illustrating minor variations to the rapidly chasing geography of that region. Moreover, Johnson's offered a service whereby he would mail updated map pages that could be tipped into older atlases to keep them current. Generally speaking, Johnson's atlas was issued in four periods - each defined by a distinctive decorative border. The earliest edition featured a strapwork border that appears as rolled and decoratively cut leather. This border work remained in use until 1863. In 1864 Johnson started using an updated fretwork or grillwork border that resembles worked iron - as in a decorative fence. This border was in use from 1863 to 1869. The 1863 edition of Johnson's atlas used both borders and is considered transitional. From 1870 to 1882, Johnson introduced a new border that featured elaborate Spirograph style geometric designs, which was used from 1870 to 1882. After 1880 a new border different but aesthetically similar to the Spirograph border began appearing. Certain editions of the atlas issued from 1880 - 1882 were transitional.