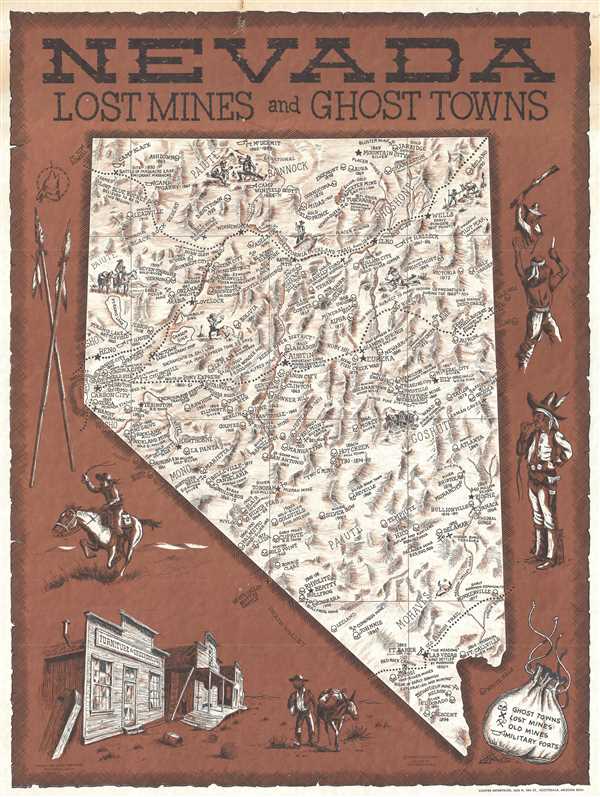 This is a 1969 Andy Dagosta pictorial map of Nevada's ghost towns and mines. The map depicts the entirety of the state from California to Utah and Arizona and from Oregon and Idaho to California and Arizona. Cities and towns throughout the state are labeled, some of which are active towns, including the handful of former mining towns that are still inhabited, such as Eureka, Austin, and Tonopah. Ghost towns, labeled by a skull icon, are much more prevalent, most of which include the year or years when it was inhabited and what was mined there. Some, such as Aurora and Jarbidge, give the amount of money that was extracted from the ground. Reno, Carson City, and Las Vegas are also labeled. Mines throughout the state are identified by a crossed shovel and pick axe, and old military forts are marked by bugles. Both the California Trail and the Pony Express Route are illustrated here, both of which are indicated by a dotted line. Vignettes of prospectors dot the state and the whole is surrounded by a pictorial border featuring illustrations of a Pony Express rider, a ghost town, and a Native American and a prospector in the heat of combat.

This map was drawn by Andy Dagosta and published by Cooper Enterprises in 1969. Dagosta was the creator of several different pictorial maps of the West that are very uncommon. For example, this Nevada map is fairly well represented in institutional collections, but we believe this to be the first example to be offered on the market.

Andrew 'Andy' Dagosta (1923 - 2009) was an American artist known for illustration and western realist painting. Born in Omaha, Nebraska, Dagosta was enthralled by movies and had a particular liking for westerns. Dagosta served in Italy in the 12th Air Force during World War II and after the war moved to Glendale, California and enrolled at the Hollywood Art Center. He completed the two-year program in which he was enrolled and subsequently opened a commercial advertising art studio in Pasadena, California. Dagosta worked closely with other western artists, including Lloyd Mitchell and Reynolds Brown, and was a co-founder of 'The American Indian and Cowboy Artists'. Dagosta died in Glendale, California in 2009.