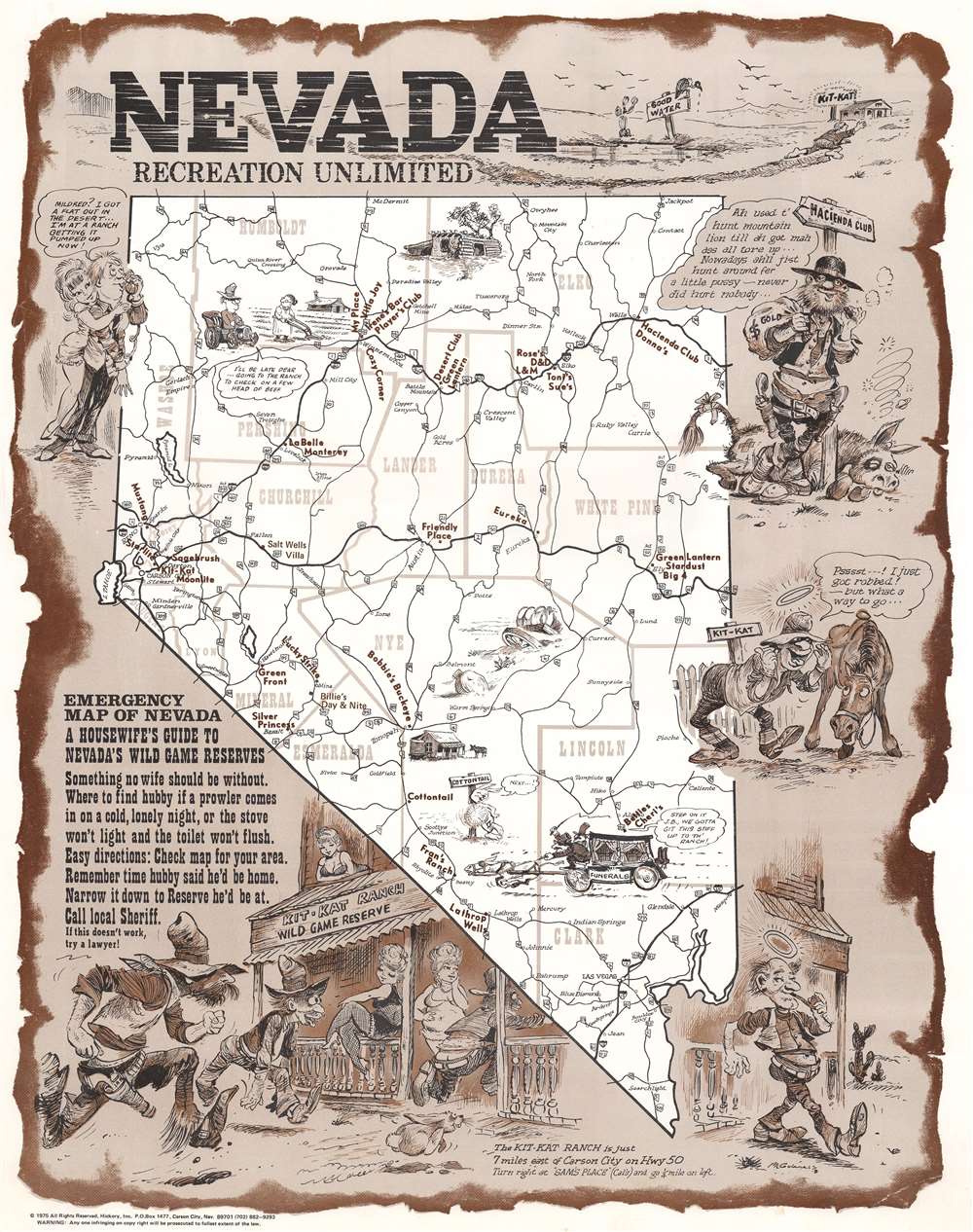 This is a 1975 McGuinness map of Nevada brothels. Bold text marks brothels around the state, with concentrations around Reno, Carson City, and Winnemucca. The map was published as an promotional for the Kit-Kat Ranch, one of Nevada's most historic brothels. Comical vignettes appear throughout while the map itself appears as if laid on aged paper - like an old prospector's map. Caricatures of prospectors promote the brothels, while a husband in a button-down shirt, slacks, and socks calls his wife to tell her 'I got a flat out in the desert…I'm at a ranch getting it pumped up now!' A text at bottom left reads:

Emergency Map of Nevada. A Housewife's Guide to Nevada's Wild Game Reserves. Something no wife should be without. Where to find hubby if a prowler comes in on a cold, lonely night, or the stove won't light and the toilet won't flush. Easy directions: Check map of your area. Remember the time hubby said he'd be home. Narrow it down to Reserve he'd be at. Call local Sheriff. (If that doesn't work, try a lawyer!)

In the United States, prostitution in any form is legal only in Nevada. Nevada Prostitution began in the middle of the 19th century as mining became a major industry. Laws regulating the industry began being passed in the 1930s, and in 1971 the Nevada legislature passed a law prohibiting legal prostitution in counties above 70,000 inhabitants. Today, prostitution remains legal some counties. There were twenty-one legal brothels in Nevada as of December 2018. A 1979 Nevada state law prohibited advertising brothels in counties that outlawed prostitution, which may be one reason for this map's rarity.

This map was drawn by McGuinness as an advertisement for the Kit-Kat Ranch and copyrighted by Hickory, Inc. Uncommon.

Very good. Closed tear extending one inch into printed area in upper left corner, professionally repaired on verso.
Looking for a high-resolution scan of this?