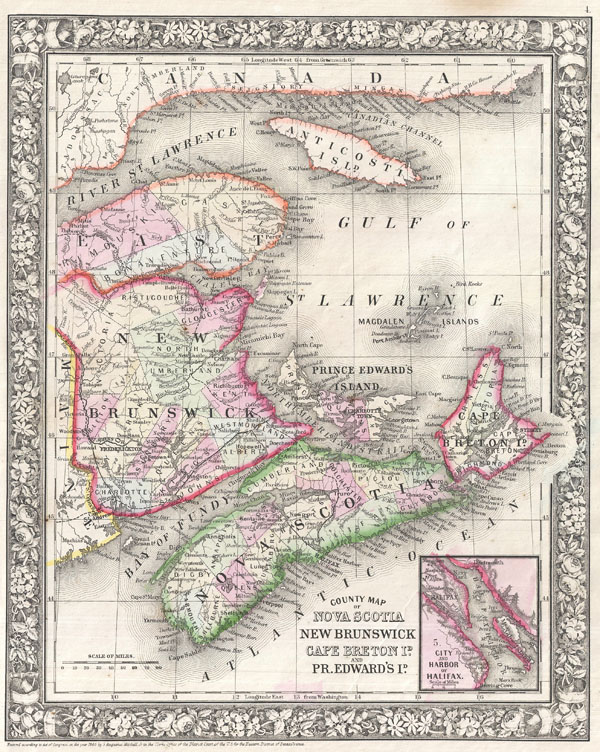 A beautiful example of S. A. Mitchell Jr.'s 1866 map of the Canadian Maritime Provinces of Nova Scotia, New Brunswick, Prince Edward's Island, and Cape Breton Island. Detailed to the county level with special attention both political and geographic elements. Notes important river systems, railways, canals, and cities. An inset map in the lower right quadrant depicts the city and harbor of Halifax. One of the most attractive American atlas maps of this region to appear in the mid-19th century. Features the floral motif border typical of Mitchell maps from the 1860-66 period. Prepared by S. A. Mitchell for inclusion as plate no. 4 in the 1866 issue of Mitchell's New General Atlas. Dated and copyrighted, 'Entered according to Act of Congress in the Year 1860 by S. Augustus Mitchell in the Clerk's Office of the District Court of the U.S. for the Eastern District of Pennsylvania.'

Mitchell Jr., S. A., Mitchell's New General Atlas, containing Maps of the Various Countries of the World, Plans of Cities, Etc., Embraced in Fifty-five Quarto Maps, forming a series of Eighty-Seven Maps and Plans, together with Valuable Statistical Tables. 1866 Edition.