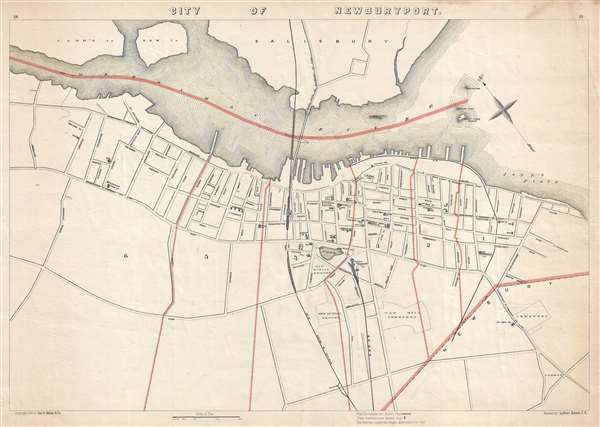 One year after the incorporation of the Newburyport Y.M.C.A, which is labeled!

This is a George H. Walker and Company 1891 city map or plan of Newburyport, Massachusetts. The map depicts the city of Newburyport from Salisbury and across the Merrimack River to the city line and from Jefferson Street in Ward 6 in Newburyport to the Joppa Flats and the Newburyport and Amesbury State Roadway. A detailed illustration, the city is divided into 6 wards. The notation used to distinguish between wards is located in the small legend along the bottom border. Most streets are labeled, although a handful remain anonymous. Numerous buildings are individually rendered. These include about a dozen different churches and about half as many schools. The jail, public library, city hall, and the Y.M.C.A are also labeled. The B. and M. Railroad and the Boston and Maine Railroad are both illustrated, although the two terminate at different stations in Newburyport. The City Railroad is illustrated as well; its route runs along the river before curving south out of town. Mean height above sea level is also noted in several locations throughout town.

This map was revised by Luther Dame and published by George H. Walker and Company in 1891.