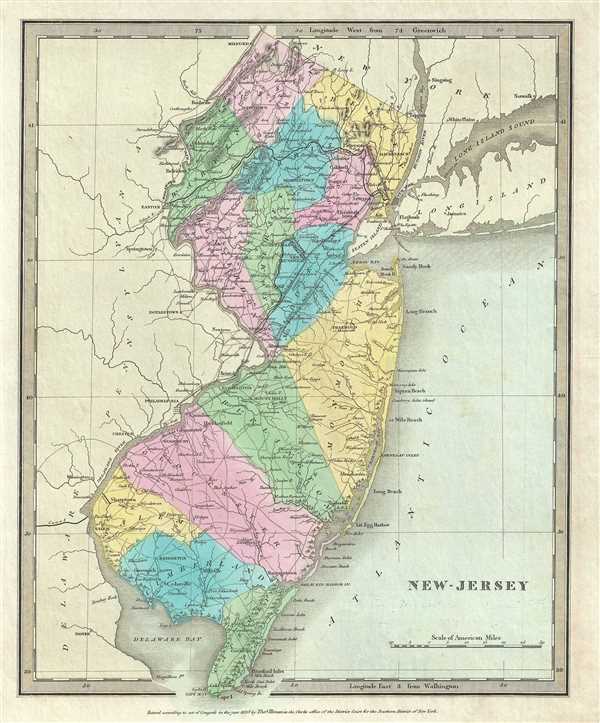 Burr's representation of the state of New Jersey.
$350.00

This is an attractive 1835 first edition map of New Jersey by David H. Burr. It depicts the state of New Jersey in detail with color-coding at a county level. Notes roads, railways, rivers, islands, cities and towns with elevation rendered by hachure.

According to Ristow, although Burr is credited on the title page, he left this atlas incomplete. He was appointed as topographer to the U.S. Post Office, and of the sixty-three maps finally included in this atlas, only completed eight. The rest of the maps were then completed by Illman and Pilbrow in Burr's style. This map was ‘Entered according to act of Congress in the year 1835 by Thomas Illman in the Clerk’s office of the District Court for the Southern District of New York’. Published by D. S. Stone in Burr’s New Universal Atlas

David H. Burr (1803-1875) of one of the first and most important truly American cartographers and map publishers. Burr was born in Bridgeport Connecticut in August of 1803. In 1822 Burr moved to Kingsboro, New York to study law. A year and a half later he was admitted to the New York Bar association. Burr must have questioned his choice of careers because shortly after being admitted to the Bar, he joined the New York State Militia. Though largely untrained in the art of Surveying, Burr was assigned to work under Surveyor General of New York, Simeon De Witt, to survey several New York Roadways. Seeing a window of opportunity Burr was able to negotiate with the governor of New York at the time, De Witt Clinton, to obtain copies of other New York survey work in order to compile a map and Atlas of the state of New York. Recognizing the need for quality survey work of its territory, the government of New York heartily endorsed and financed Burr's efforts. The resulting 1829 Atlas of the State of New York was the second atlas of an individual U.S. State and one of the most important state atlases ever produced. Burr went on to issue other maps both of New York and of the United States in general. In cooperation with publishing firm of Illman & Pillbrow, he produced an important New Universal Atlas and, with J.H. Colton, several very important maps of New York City. In recognition of this work, Burr was appointed both "Topographer to the Post office" and "Geographer to the House of Representatives of the United States". Later, in 1855, Burr was assigned to the newly created position of Surveyor General to the state of Utah. Burr retired from the position and from cartographic work in general in 1857. (Ristow, W. W., American Maps and Mapmakers; Commercial Cartography in the Nineteenth Century, p. 103 - 108.)