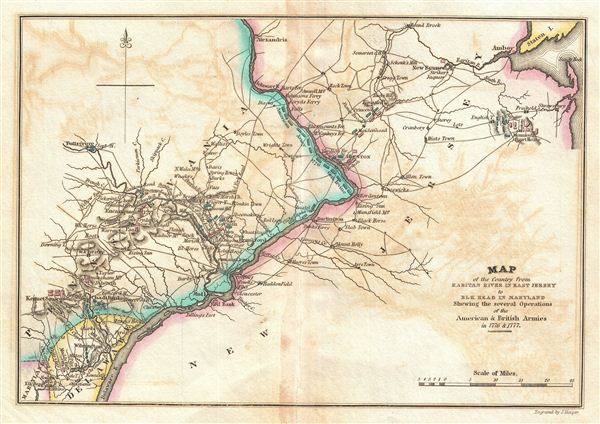 This is a rare map of central New Jersey and eastern Pennsylvania during the American Revolutionary War issued for John Marshall's 1832 edition of the Life of Washington. The map covers the lands on both sides of the Delaware River from Alexandria, Sandy Hook, and Staten Island south pas Philadelphia and Trenton to Delaware and Maryland. Various rivers, major roads, and the sites of important battles are noted. Color coding illustrates the positions of the British (red) and American (blue) as each side battled to maintain control of major cities and river supply routes.

Marshall prepared this map to illustrate the important Middle Atlantic theater of the American Revolutionary War. Specifically this map documents the battles of Brandywine, Germantown, Trenton, Paoli, Princeton and Monmouth. Though both sides claimed significant victories, the greater strain fell on the British, who though successful in the capture of Philadelphia, suffered losses enough that the position became untenable. The ultimate source for this map was the work of John Hills who accompanied the British army as a cartographer and after hostilities moved to Philadelphia.