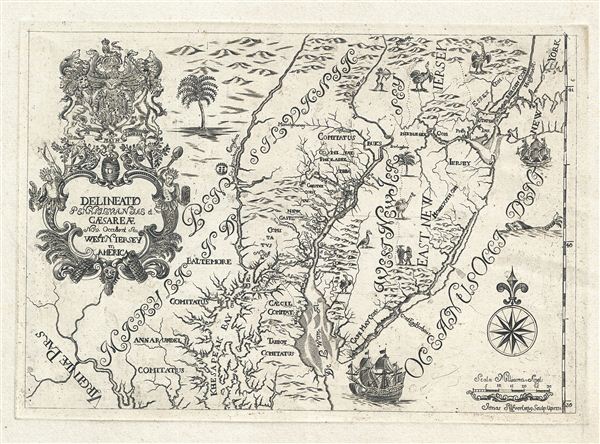 This is an extremely rare whimsical 1731 map focusing on the remnants of the ephemeral colony of New Sweden by Jonas Silferling and Tobias Biorck. New Sweden, which by 1731 had been assimilated into British New York, occupied parts of Delaware, New Jersey and Maryland between the Chesapeake Bay and New York. The present map centers on the Delaware River and Philadelphia, but extends northward as far as Albany and sough as far as Virginia, taking in portions of eastern Pennsylvania and Southern New York. As intended, it illustrates numerous early Swedish settlements, including Fort Christina (Wilmington, Delaware), on both sides of the Delaware River as well as various American Indian settlements and the english colonial cities of Philadelphia, Burlington, New York, and Albany. Curiously, much of the map is in english rather than Swedish, an indication of British social and political dominance in the region and a suggestion that Tobias Biorck, though a first generation son of Swedish immigrants, thought and lived primarily in english.

The cartouche, which is surmounted by the British royal armorial crest, is also suggestive of the 1655 assimilation of New Sweden into British America. Other decorative elements include beautifully engraved sailing ships, a sea monster, stylized American Indians, and various flora and fauna (most Turkeys) indigenous to the region. The map's is also particular charming because of some of its cruder features which include rough engraving, the idiosyncratic lettering, florid calligraphy, and the proliferation of mis-spellings such as 'Buks' County, 'Baltemore' and 'Khesapeak Bay.'

It is noteworthy that the present example is exceptional and superior in condition to most other known examples held in institutional collections. Unlike some examples of this map, this piece has no centerfold, suggesting that it was most likely side-bound. This is a rare one in a lifetime opportunity to own an extremely rare and significant map.

Tobias E. Biorck (1668 - 1740) was an American historian of Swedish descent active in New Jersey the late 17th century. Biork was born in the Americas near what is today Wilmington, Delaware. His father, Ericus Biorck, was a minister who immigrated to the former Swedish colony of New Sweden in 1667 with the intention of preaching to the colonists. By 1655 the Swedish crown had given up all claims on the region and the colony was absorbed into the lands administered by the Dutch West India Company in New Amsterdam. Shortly afterwards the Dutch themselves were ousted by the numerically superior British who quickly rose to social and political dominance in the region. Though Biorck was ethnically Swedish he most likely lived and thought in English. His primary work, a history of New Sweden in America, is also partially in English though it was published in Sweden. The short volume, though extremely rare, is exceptionally important as one of the few windows into the early Swedish experience in the Americas.


Jonas Silfverling (June 14, 1703 - 1760) was a Swedish goldsmith and engraver active in Stockholm, Sweden, in the early 18th century. As an engraver Silfverling corpus focuses primary on maps and botanical prints. His distinctive engraving style is rough with strong lines, odd lettering, and elaborate calligraphy is instantly recognizable.

Very good. Original platemark visible. Blank on verso. No centerfold - which is unusual for this map - and on heavy stock.