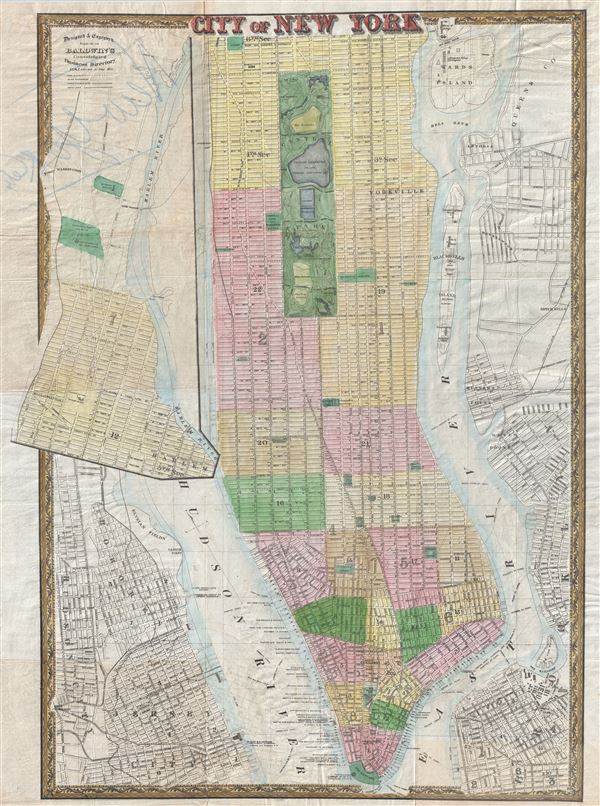 A very uncommon map, this is the c. 1866 Map of New York prepared and issued for Baldwin's Consolidated Business Directory. The map covers Manhattan from 119th street to Battery Park as well as parts of adjacent Hoboken, Jersey City, Brooklyn, and Queens. A large inset in the upper left quadrant continues to illustrate the New York street grid, both extant and proposed, up to 203rd street. Color coding defines City Wards and Central Park is illustrated in its full completed form. Important buildings, parks, rail lines, and municipal sites are also clearly identified. Labels most of the piers in lower Manhattan and shows street building numbers. Where Columbia University now stands, this map reveals a 19th century Lunatic Asylum. In Queens, labels Hunters Point and shows the beginnings of the Long Island Railroad.

A note in the upper left corner suggests that this map was 'Designed and Engraved Exclusively for Baldwin's Consolidated Business Directory.' Nevertheless, the relationship to Matthew Dripps' map of 1865, issued in the City Clerk's Manual of the City of New York, is clear. Both maps have a similar format and design, but this example, issued for Baldwin, is presented on a considerably larger scale with greater decorative appeal. It is uncertain who engraved this map, but it is more than likely that the work is by Dripps himself. It is conceivable that he did not sign the final product in an attempt to distance himself from legal entanglements with the City Clerk's office, his largest client.

This map is not identified by Haskell and appears to be extremely rare.

H. A. Baldwin (fl. c. 1865 - c. 1869) was a New York City based publisher of business directories and tourist guides. Baldwin's Consolidated Business Directory was most likely his most successful enterprise. It combined the directories of three major cities, New York, Boston, and Philadelphia, into a single book. It was sold by subscription from 1866 to 1868 and at one point may have reached a readership of more than 10,000. His other works include a guide to Central Park published in 1866. Little else is known of Baldwin and his work. Learn More...

Good. Laid down on archival tissue for stability. Some writing on back that is visible from the front due to the transparency of the paper, upper left corner. Some creasing.
Looking for a high-resolution scan of this?