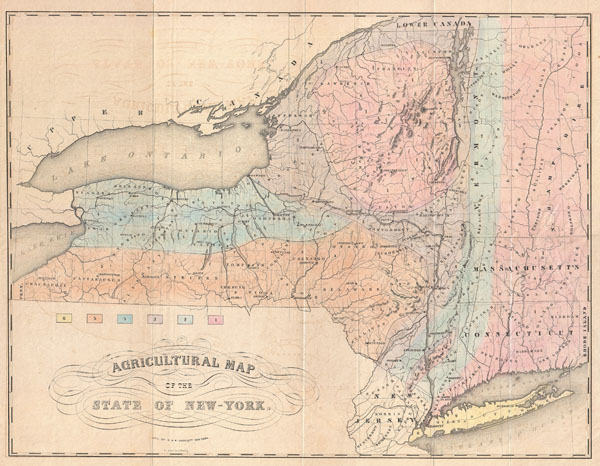 This is a rarely seen 1846 thematic of New York by E. Emmons and G. & W. Endicott. Divides the state of New York, as well as neighboring states of Connecticut, Massachusetts, New Hampshire and Vermont, into six distinct agricultural zones. It is interesting to note that even at this early date Emmons identifies the Adirondacks as an independent agricultural zone clearly definable from other nearby mountain regions. Published in 1846 to illustrated volume one of E. Emmons' Agriculture of New York.

Emmons, E., Agriculture of New York comprising an Account of the Classification Composition and Distribution of the Soils and Rocks and the Natural Waters of the different Geological Formations together with a condensed View of the Climate and the Agricultural Productions of the State, Vol 1, 1846 New York edition.

Bourcier, P. G., History in the Mapping: Four Centuries of Adirondack Cartography : a Catalog of the Exhibition, June 15, 1984-October 15, 1985, page 20.
Looking for a high-resolution scan of this?