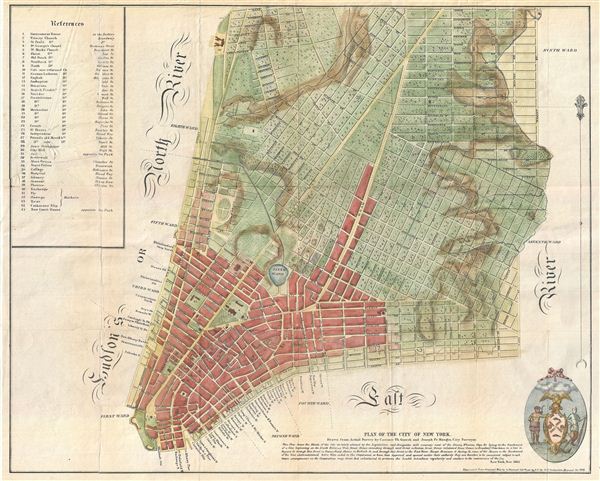 An interesting and unusual map, this is an 1856 reissue of the 1801 Mangin-Goerck Plan. Those who know New York's shoreline will pause at the perfect blocks and ridged angles of this plan no more accurate today than it was in 1801 when Joseph Mangin first presented it. Mangin, a talented French architect, and Casimir Goerck, an established New York Surveyor, were commissioned by the Common Council of New York to prepare a new regulatory map of the city. Though Goerck passed away before the plan could be completed, Mangin finished the plan on a grand scale, re-envisioning New York City in his own image. Mangin even added streets such as Mangin Street and Goerck Street which would have been submerged under the East River had they actually existed (as a side note another of Mangin's Street's, South Street, did eventually appear). The Mangin-Goerck plan went far beyond the Common Council's dreams of an administrative plan and, due to its inclusion of 'intended improvements,' new streets, and idealized block structure, enjoyed a short lifespan. This example of the unobtainable Mangin-Georck plan of New York City was issued in 1856 for Valentine's Manual of the Corporation of the City of New York.


Joseph-Francois Mangin (June 10, 1758 - 1818) was an architect, city surveyor, and civil engineer active in New York during the late 18th and early 19th century. Mangin was born in Vosages, France, the son of Jean-Baptiste François Mangin, the king's surgeon. He went to both high school and University in Nancy, graduating in 1781. He apprenticed under Ange-Jacques Gabriel in the design of the Place de la Concorde, Paris. He then traveled to the French colony of Saint Domingue (Haiti), presumably to make his fortune, but was force to flee in 1793 because of the 1792 Haitian Revolution (1792 - 1796). By this time the French Revolution was well underway, Mangin's family, royalists all, were arrested and executed at the guillotine. Mangin came to New York city in 1786 as a refugee, but quickly acquired the patronage of Alexander Hamilton, and was admitted as a Freeman of New York on May 9, 1796. He submitted several projects to the Common Council of New York, including a recommendation to drain the Collect Pond and various improvements to the port facilities. In 1797, he was commissioned, along with fellow surveyor Casimir Goerck, to make a large scale plan of New York City - the first since American independence. He presented the plan to the Common Council in 1801. While the council initially approved of the plan, it was dismissed in 1803 due to anti-Hamilton political maneuvering. Nonetheless, the Mangin-Goerck Plan, which proposed landfill work and a new street grid, was highly influential. Mangin is also today credited with the principal design of New York's first City Hall although fellow designer, John McComb unilaterally denied Mangin's claims in an attempt to steal credit for the work. Mangin remained favorite with the Common Council and was commissioned to work on the 1811 Commissioner's Plan of New York City, a truly meritorious work that laid out the permanent street grid for most of Manhattan. Mangin left New York in 1818, presumably back to France, and is believe to have died there. Learn More...