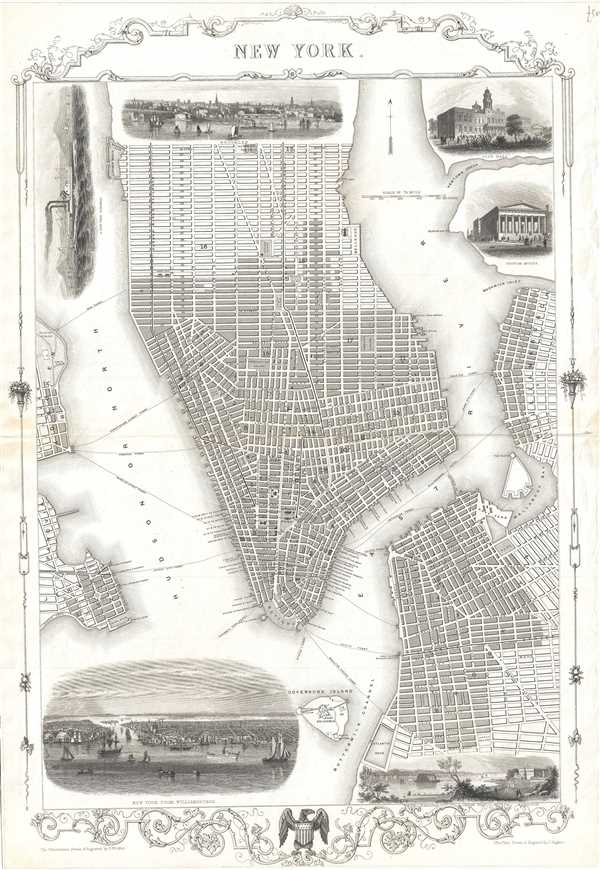 One of the most decorative maps of New York City from the mid-19th century.

This is a beautiful example of John Tallis and John Rapkin’s 1851 decorative map of New York City. Covers the city from the Battery north as far as 42nd Street and includes Governor’s Island and parts of Brooklyn and Jersey City. Notes streets, piers, ferry lines, parks, and important buildings. Six beautifully engraved vignettes adorn the map. These include a view of New York from Williamsburgh, The Narrows from Fort Hamilton, City Hall, Custom House, a view of Brooklyn and a New York Streamer. The map is surrounded by an elaborate decorative border, which includes a coat of arms of the United States.

Tallis's city plans did not appear in all editions of his atlas and so have today become quite rare. Tallis prepared this map for inclusion in R. Montgomery Martin's Illustrated Atlas, And Modern History of The World.

Very good. Minor toning and wear along original centerfold. Minor edge wear.
Looking for a high-resolution scan of this?