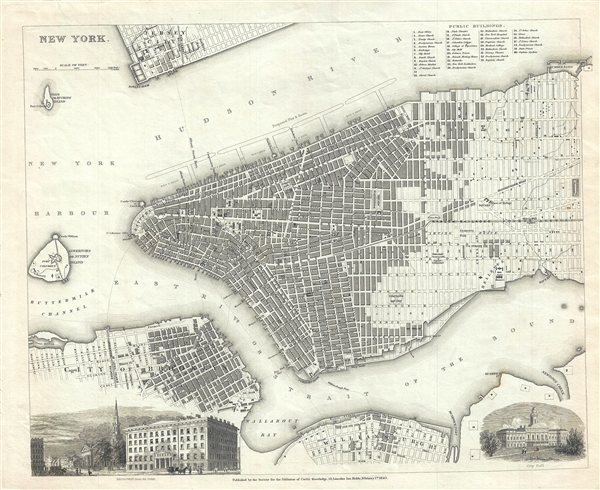 This is a scarce 1840 first edition map or city plan of New York City, published by the Society for the Diffusion of Useful Knowledge. The map covers southern Manhattan from the Battery northwards to 42nd street as well as portions of adjacent Jersey City, Brooklyn, and Williamsburg. Governors Island and Ellis Island appear in the harbor. Massive proposed docks on the Hudson River, none of which actually materialized, as well as tentative landfills on the East Side and in Williamsburg, are ghosted in. Shading illustrates the areas of heaviest development in each of the three cities depicted. In Manhattan specifically no less than 40 important buildings are identified numerically and by a key in the upper right quadrant. Several ferry lines are illustrated crossing both the Hudson and East Rivers. Railroads and Tramways are indicated. In the lower quadrants engraved views illustrate 'Broadway from the Park,' that being City Hall Park with Trinity Church clearly visible in the background, and City Hall itself.

This map is part of A Series of Maps, Modern and Ancient, issued by subscription by the SDUK. Each folder in the series would contain a set of two maps bound together. The map accompanying this folder, not included here, was of Parma, Italy. Original folder includes the names of committee members of the ‘Society’, a list of maps already published, the folder number, which is this case is LXXXII, the contents and the printer and publication details. This map was engraved and printed by J. Henshall and William Clowes and Sons and issued by the Society for the Diffusion of Useful Knowledge on Feb 1, 1840 for publication in their Feb 17, 1840 subscriber’s edition folder. The folder at the time was priced at 1 shilling plain or 1 shilling 6 pence colored. This map was later issued in the S.D.U.K. Atlas which was appeared in several editions from about 1844 well into to the 1850s.