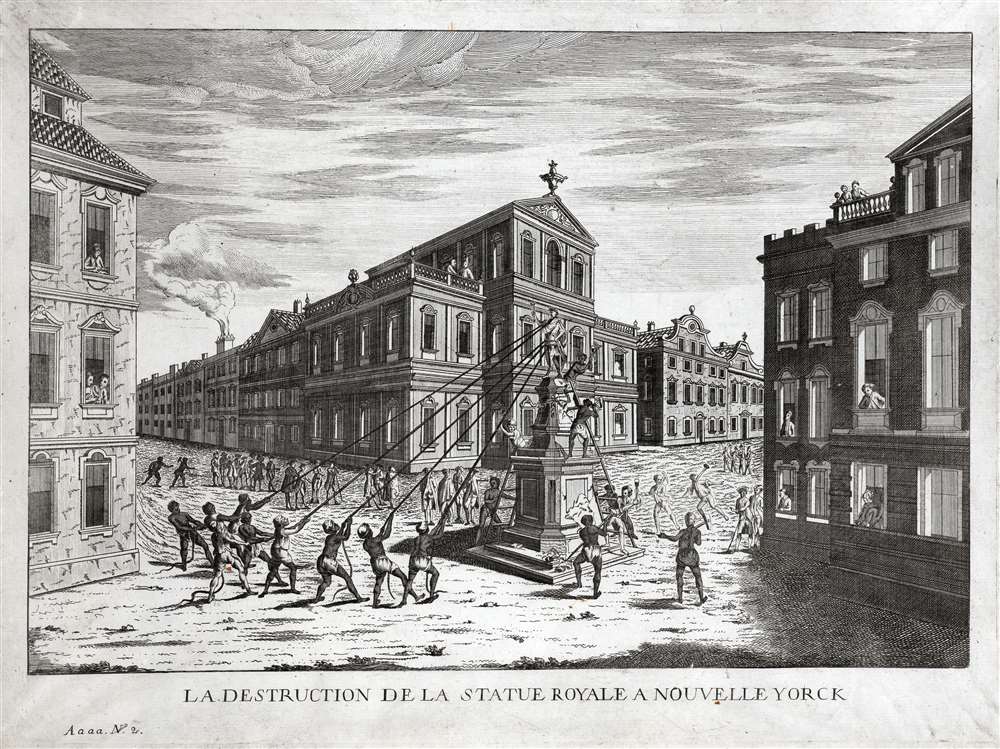 Revolutionaries Pull Down the Statue of George III, as Imagined by a Monarchist.
$1,200.00

This is Franz Xaver Habermann's engraving, showing his conception of the unrest gripping the city of New York following the reading of the Declaration of Independence on July 9, 1776 and the onset of the American Revolutionary War (1775 - 1783). The view refers to a historical event: The reading of the Declaration so emboldened the patriotic crowd that they tore down the statue of King George III, decapitated it, broke it into pieces - and shipped the remains to Connecticut, where the 4000 pounds of lead were melted down to cast 40,000 bullets, to be used against the British. (The head was set on a pike outside of Moore’s Tavern near Fort Washington, but was rescued by loyalists - including British officer, military engineer and mapmaker John Montresor - and eventually sent back to England.) New Yorkers never did like the statue: in 1773 an anti-graffiti, anti-desecration law was enacted in the city expressly to protect the statue from the abuse it regularly received.

Engraver Franz Xaver Habermann had not observed the scene, nor had he ever laid eyes on the statue, or indeed on New York at all. (The Augsburg-based engraver's various views of the city tend, architecturally, to resemble Augsburg.) The statue shown here also lacks the horse, upon which George III rode in the actual statue erected in 1770. What Habermann lacked in reference material, he made up for with pro-royalist sympathy and outrage: the evident lack of loyalty in the American city inspired alarm and derision among Europeans still wedded to monarchy, and it is in this spirit that the present view was engraved. In addition to the material inaccuracies of the view, Habermann portrays the toppling of the statue as being done, not by zealous revolutionaries, but by black, turbaned men (with a few hammer-wielding, hatless rabble) while well-heeled-and-hatted colonials stand aside and watch. Onlookers sitting safely in nearby houses exhibit expressions of mild dismay. The message - that the revolutionaries lacked the courage of their convictions, that they were reliant on their slaves to do all their heavy lifting, and that there was a helpless loyalist population not represented - would have been welcome to Habermann's audience.

Further Publication as a vue d'optique

Habermann's views of New York during the Revolution were well-received, and were reproduced by the French publisher Chereau for use as vues d'optique, or lantern prints. These prints were meant to be projected and seen through an optic device called a zograscope, an early form of 3-D viewer which magnified the image and created a sense of depth. The operation of the zograscope resulted in the reversal of the image. Consequently, views produced for the use of a zograscope were engraved in reverse, usually with additional titles engraved backwards to be legible in a mirror image. Chereau's (mirror image) issue of this view can also be distinguished by the title being presented both in French and in German.

Drawn by the German engraver Franz Xaver Haberman, and published in 1776 by L'Academie Imperiale d'empire des Arts Libereaux, Augsburg, Germany, as part of a collection of views entitled Collection des Prospects. This example differs from the one cited in Creswell: the title is only in French, and it bears the additional text 'Aaaa No. 2' in the lower left corner. We see examples of this state of the view in the Massachusetts Historical Society Library, the Boston Athenaeum, the Leventhal, and the University of Minnesota.

Franz Xaver Habermann (1721-1796) was a German engraver and artist active in the second half of the 18th century. Habermann was based in Augsburg where he was a well-respected engraver of urban views, particularly "vues d'optique" a type of lantern view rendered in reverse with the intention that it be viewed through an optic device. He is particularly known for his views of American cities, most specifically New York and Boston, which though merely artists conceptions and highly fictive, do illustrate the common European perception of the English colonies at the outset of the American Revolutionary War. Habermann's name occasionally appears in its French variant, "Francois Xav. Habermann" or more simplistically as "F. X. Haberman". Learn More...

Very good. Some age toning and wear apparent throughout, but generally clean.