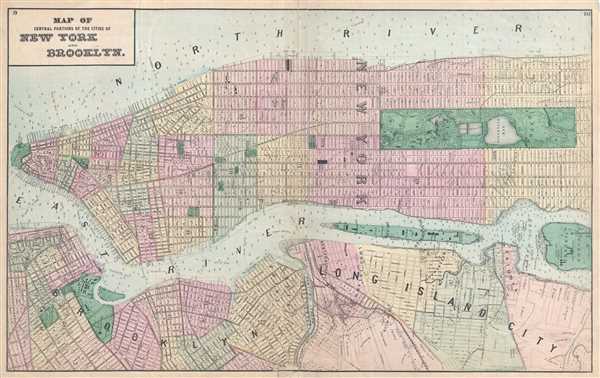 A rare example of Fredrick W. Beers' Map New York City, New York. Published in 1873, this map depicts New York City to 115th Street and parts of Brooklyn and Queens. Features detail to the street level showing individual buildings, parks, and street names. Offers exceptional detail in Central Park and Queens, areas generally neglected by earlier maps of the city. Blackwood Island (Roosevelt Island) is beautifully detailed with a Hospital shown at the southern tip of the Island where today we see only a decrepit, if glorious, ruin. Shows the beginning of the Long Island Railroad at Hunter's Point and the individual buildings of the Lunatic Asylum on Ward's Island. Prepared by Beers, Comstock & Cline out of their office at 36 Vesey Street, New York City, for inclusion in the first published atlas of Long Island, the 1873 issue of Atlas of Long Island, New York.

Very good. Some toning and damage along original centerfold, repaired on verso. Bottom margin near centerfold exhibits some damage with verso repair.