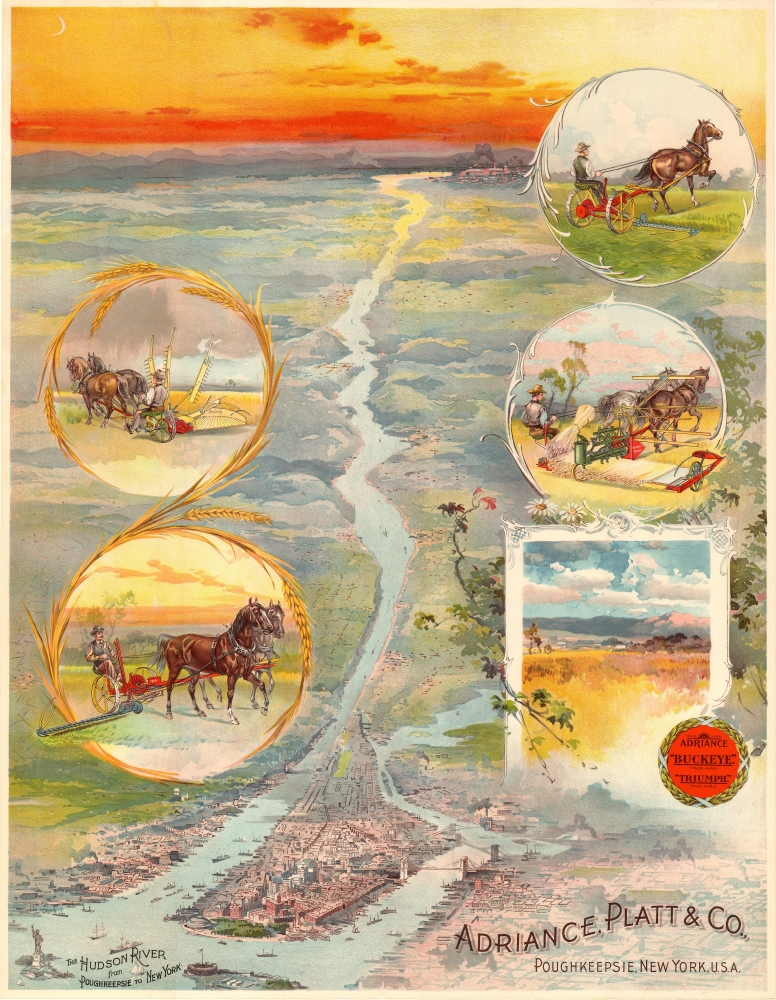 A dramatic c. 1910 chromolithograph view of New York City and the Hudson River Valley as far north as Poughkeepsie and the Mid-Hudson Bridge. This map was issued on behalf of Adriance, Platt and Company, a Poughkeepsie based firm specializing in horse-drawn farm equipment. The map employs strikingly blended color lithography to illustrate the transition from the urbanization of New York, Hoboken, and Brooklyn, to rolling hills and bucolic farmsteads of the Hudson valley. Vignette illustrations of Adriance, Platt and Company products, various rakes, reapers, and balers, appear to either side of the Hudson.

Adriance, Platt and Company were makers of farm equipment based in Poughkeepsie, New York. The firm was founded in Syracuse, New York, in 1852 and consisted of John P. Adriance (1825 - 18??), Samuel Platt, and Samuel Sears under the name of Sears, Adriance and Platt. The firm relocated to Poughkeepsie in 1859, and Sears split off in 1863, after which the firm traded as Adriance, Platt and Company. They were best known for the 'Buckeye' Mower, a horse drawn reaper initially invented by Louis Miller - hence the term 'Buckeye.' The firm liquidated in 1913 when most of its assets were acquired by the Moline Plow Company of Illinois.

The print is undated and there is no imprint, but from the development of bridges to and from Manhattan, and the history of Adriance, Platt and company, we can date it to sometime between 1900 and 1910. The illustration shows both the Manhattan Bridge (opened in 1909) and the Williamsburg Bridge (opened in 1903). It was common on early views to be forward thinking and introduce bridges and other major constructions that were not yet constructed but proposed - so their presence alone does not definitively date the piece. Both of these bridges were proposed in the late 19th century and appear on views as early as 1897. On the opposite side of Manhattan, a third bridge, the proposed 57th Street Hoboken Bridge across the Hudson is noted. This bridge, which would have been twice as long as the George Washington Bridge, was never construction, but proposals for it appear in Harper's Weekly as early as the 1890s. The project was stalled by the Panic of 1893 and ultimately abandoned.

This view is rare, the present offering being the only known example. It is notably not listed in OCLC, nor does it appear in the catalog of the Jay T. Last Collection at the Huntington Library.

Very good. Backed on canvas.
Looking for a high-resolution scan of this?