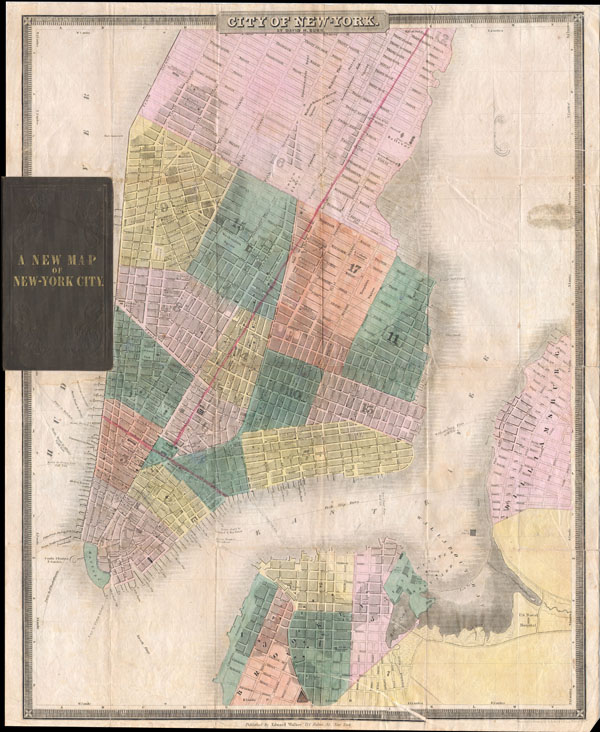 This is the c. 1834-1836 edition of David H. Burr and Edward Walker's important pocket map of the City of New York. Covers New York City south of 26th street on the west side and south of 40th street on the east side. Shows the city in considerable detail with attention to churches, theaters, ferries, government buildings, museums, and other public centers. Columbia College is noted on Murray Street. Also notes the Fulton Fish Market, St. Marks Church in the East Village and the nation's first hospital at Bellevue. This map includes parts of Brooklyn and Williamsburg, which, at the time, were separate cities. The proposed landfill in the East River just south of Bellevue is projected, but would remain incomplete for several years following the issue of this map. Burr issued this map in various states from 1834 to 1845 in conjunction with two separate publishers, Edward Walker (114 Fulton Street) and J. H. Colton (172 William Street). The Colton variants are sometimes dated, but Walker did not put a date stamp on his issues, thus making this map very difficult to date with precision. What we do know is that later issues contained a legend in the lower left hand quadrant which ours does not, marking it as an earlier variant. Engraved by S. Stiles of Wall Street, New York. Book library stamp reads 'Hermon Stevens.' This could either refer to one Hermon Stevens who was a lawyer in Rockland Maine during the mid 19th century or another Hermon Stevens who lived in St. Lawrence County New York in 1865.