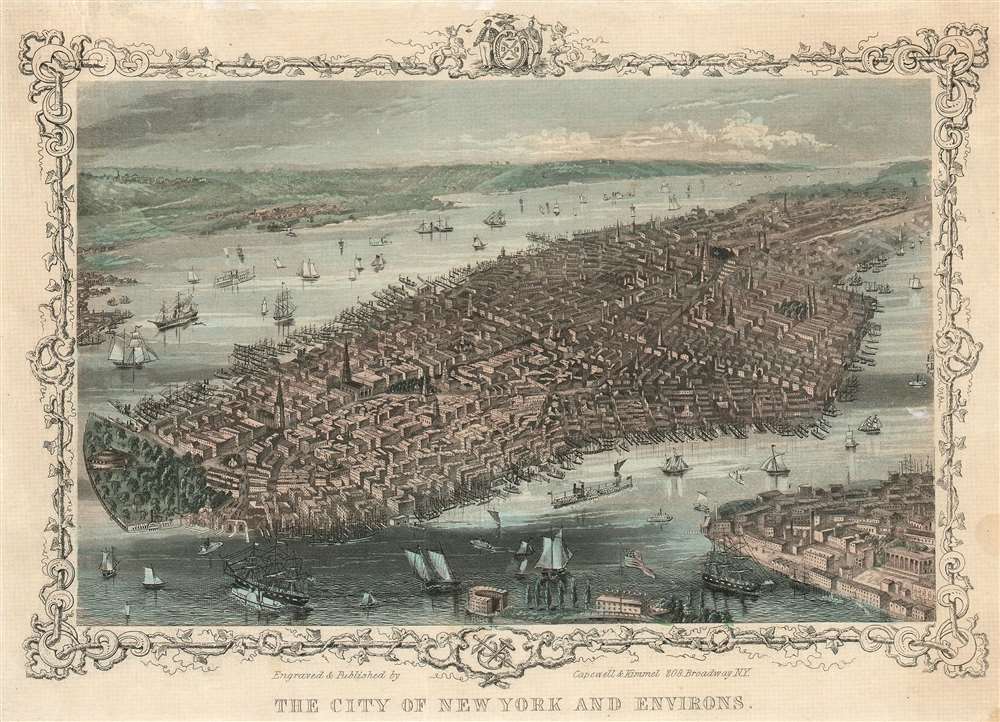 A ephemeral handout from New York's 1853 Exhibition of the Industry of All Nations World's Fair.
$400.00

This is an attractive 1853 bird's-eye view of New York City issued by the firm of Capewell and Kimmel. The view looks northward on New York from a fictional point high above Governor's Island. Brooklyn Heights appears on the right and Battery Park on the left. Ships of pleasure, transport, and industry fill the harbor, as well as both the Hudson and East Rivers. In the distance parts of Hoboken and Weehawken are evident. Coverage extends northward and the Crystal Palace, in what is today's Bryant Park, and the Latting Observatory, are clearly evident. This map was part of a series of views prepared by Capewell and Kimmel for the 1853 Exhibition of the Industry of All Nations - for which the Crystal Palace was the centerpiece.

Exhibition of the Industry of All Nations

The Exhibition of the Industry of All Nations was an 1853 World's Fair held in New York City. The fair followed on the success of the 1851 Great Exhibition of London, and mimicked many of its most popular features, including an enormous Crystal Palace. Like most grand exhibitions, the EIAN was intended to boast of the industrial achievements of the host nation - in this case, the still relatively young United States. The centerpieces of the fair, an impressive Crystal Palace and the nearby Latting Observatory, were situated in what is today Bryant Park. More than 1 million people from all over the world visited the fair and marveled at its many exhibits, including Elisha Otis' debut of a wacky new invention - the elevator.

This view is rare. We have been unable to trace any other examples. Other images with comparable border art, were issued by Capewell and Kimmel for the 1853 New York exhibition, and many of these are preserved in the New York Public Library and at the City Museum of New York, which is how we date this. The present view, however, is unrecorded, making this the only known example.

Samuel Capewell (January 22, 1826 - 1865) was a British born line and letter engraver, and publisher, active in New York in the middle part of the 19th century. Capewell was born in Birmingham, England and emigrated to New York in 1850. Much of his work is associated with Christopher Kimmel, a German immigrant engraver with whom he lived at a Manhattan boarding house in 1850. They joined forced under the imprint of 'Capewell and Kimmel', around 1853 - probably to capitalize on the Industry of All Nations Exhibition (1853 - 1854) then drawing people to New York. The firm later acquired the lucrative contract to print fashion image for Goudy's Magazine. They published prolifically until 1863, when Capewell, then living in Newark, New Jersey, was drafted to fight in the American Civil War. Although there is no record of Capewell in the Soldiers and Sailors database, there is an 1865 life insurance claim for him with Mutual Life, suggesting he must have died in that year. Learn More...


Christopher Kimmel (1830 - May 4, 1872) also known as P. K. Kimmel, was an engraver, lithographer and printer in New York City active in the middle to late 19th century. Kimmel was born in Germany around 1830 and emigrated to New York around 1850. From 1853 to at least 1862, he published prints with British-born engraver Samuel Capewell, with whom he lived in the same Manhattan immigrant boarding house in 1850. Together, they published under the imprint of 'Capewell and Kimmel'. In 1863 Capewell was drafted to fight for the Union in the American Civil War where records suggest he died in 1865. From 1865 to 1871, Kimmel partnered with Thomas Forster under the imprint of 'Kimmel and Forster'. Later he published under his own imprint, 'Chr. Kimmel and Company.' Learn More...

Good. Some toning.
Looking for a high-resolution scan of this?